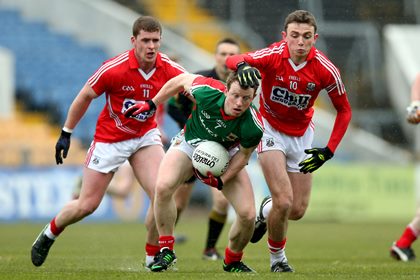 Conor Counihan's three-in-a-row league champions looked to be on course for another semi-final appearance when they eased into a 0-7 to 0-1 lead after 25 minutes. But last year's beaten finalists Mayo had narrowed the gap to three points, 0-5 to 0-8, at the break before overtaking the Rebels in the dying stages to set up a semi-final meeting with Dublin in Croke Park next Sunday.

Aided by a strong wind in the opening half, Cork dominated the early exchanges with three points from Daniel Goulding, two from Fintan Goold and one each from Aidan Walsh and Mark Collins giving them a six-point cushion.

Mayo had to wait until the 26th minute for their second point from Kevin McLoughlin, who had opened their account some 24 minutes earlier. Paudie Kissane then restored the holders' six-point advantage, 0-8 to 0-2, before three Mayo points in-a-row from Mickey Conroy, Aidan O'Shea and Alan Freeman left it all to play for in the second half.

Centre back Donal Vaughan edged James Horan's side closer with the opening score of the second half, only for Goold to reply with his third. Cillian O'Connor and McLoughlin cut the gap to the minimum before McLoughlin tied up the scoring at 0-9 apiece with his fourth white flag in the 53rd minute.

Daniel Goulding's free restored the home side's lead with 11 minutes to go, but they weren't to score again as O'Connor levelled before nudging the Westerners back in front.

Cork, who introduced former Antrim star James Loughrey in the closing stages, had two late chances from frees to salvage something, but Goulding was off-target with both as Mayo held on to secure a memorable victory.