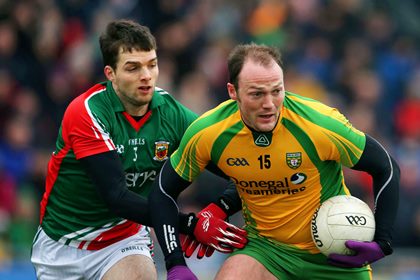 Mayo gained a small measure of revenge for last year's All-Ireland SFC final defeat when getting the better of Donegal in Castlebar today.

In the process, James Horan's men greatly enhanced their chances of avoiding relegation to Division 2 and dragged the All-Ireland champions into the relegation quagmire.

Michael Conroy's second half goal gave James Horan's men the impetus and they pushed on to secure a valuable win.

As the game reached an exciting climax, Anthony Thompson (Donegal) and Jason Doherty (Mayo) were shown their marching orders in separate incidents.

Murphy (free) and McFadden helped establish an early 0-4 to 0-1 cushion for the All-Ireland champions by the 16th minute before O'Connor pulled a point back from open play.

A Kevin McLoughlin free left the narrowest of margins between the teams and, moments later, McLoughlin teed up Jason Doherty for a great goalscoring opportunity but the number 14 failed to find the target with just Paul Durcan to beat.

O'Connor levelled matters when pointing a free following a foul on Conroy and further points from McxLoughlin and O'Connor parachuted the team in green and red into a 0-6 to 0-4 half-time lead.

Donegal enjoyed the better of the early second half exchanges and points from Marty O'Reilly and Paddy McBreary had them back on level terms.

O'Connor (free) and Rory Kavanagh exchanged points before Conroy struck for the game's only goal.

Ryan McHugh cut the deficit for Donegal but they were dealt a blow when Thompson was sent for an early shower after picking up a second yellow card.

The blow of Doherty's sending-off, also for a second yellow card offence, was softened for Mayo when Enda Varley made the win safe with two late points.

O'Connor top-scored for the winners with 0-5, four of which came from frees.