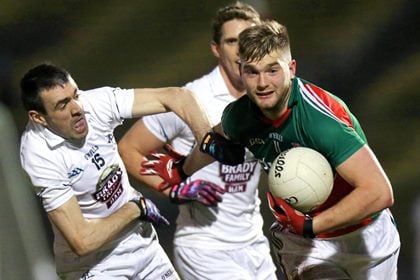 Kildare displayed admirable character to put the disappointment of last weekend's second half collapse against Dublin behind them and return to winning ways in the NFL Division 1 away to Mayo this evening.

6,572 was the official attendance at Castlebar and the home supporters would have been pleased with how the opening 20 minutes panned out but Kildare recovered from a slow start to record a fourth win of the campaign.

Kieran McGeeney's charges were on the ropes early on but Eoin Doyle's goal turned the tide in their favour and they went on to record a deserved victory and add to Mayo's relegation worries in the process.

An Evan Regan point for Mayo, almost straight from the throw-in, set the tone for the early exchanges.

James Horan's men were quick out of the blocks and established a 0-6 to 0-0 lead with Cathal Carolan (2), Jason Doherty, Kevin McLoughlin (free) and Colm Boyle also finding the target.

Niall Kelly finally got Kildare off the mark after 20 minutes but the promising youngster's effort was soon cancelled out as Boyle sent over his second point.

Kildare soon began to find their rythmn and Seanie Johnston and Johnny Doyle registered points before Eoin Doyle threw the Lilywhites a lifeline with a goal to leave the scoreboard reading Mayo 0-7, Kildare 1-3.

Former Cavan player Johnston levelled matters with his second point and he brought his personal tally to three via a placed ball to give Kildare a slender 1-5 to 0-7 advantage at the half-time whistle.

With 50 minutes played, Kildare were 1-8 to 0-9 to the good. Daniel Flynn, Johnston and Paddy Brophy added to their tally while Regan (2) kept Mayo ticking over.

'Young Footballer of the Year' Cillian O'Connor was introduced for Regan in an attempt to halt Kildare's gallop but Kelly opened up a three point lead for the Lilywhites.

Two quick-fire points from Doherty (free) and Tom Cunniffe left the bare minimum between the sides.

Fionn Dowling and O'Connor (free) then exchanged scores and Kildare led by 1-10 to 0-12 with 67 minutes played.

Eoghan O'Flaherty gave them a two-point cushion and all Mayo could muster in response was another O'Connor free.