FL1: O'Hare points Down to victory 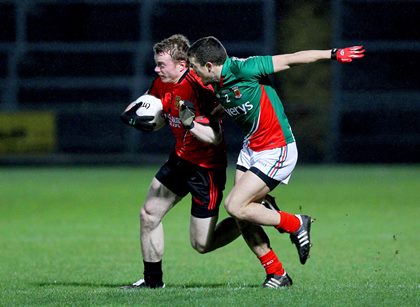 Down's Brendan McArdle with Mayo's Chris Barrett.
©INPHO.
Down bounced back to record a 0-13 to 0-11 win over Mayo at Pairc Esler tonight.

The Mourne men picked up their first points of the campaign with a hard earned win over Mayo as corner forward Donal O'Hare kicked eight points over the course of the match.

In the fifth minute, Down opened the scoring when Donal O'Hare pointed a free from 30 metres out, straight on front of the Mayo goal. At this stage of the match, it was the home side that were dominating possession.

Nonetheless, it was Mayo that got the next score as the inform Jason Doherty turned smartly and fisted over the bar. Doherty has been in great form this season and had scored six points in each of his last two games. The visitors had the chance to stretch their lead soon after, but goalkeeper Kenneth O'Malley sent a '45 wide.

From the kick out, Aidan Carr found Paul McComiskey and the wing forward raced through before slotting over the bar. Doherty responded with a free from 25 metres to make it 0-2 to 0-2 after eleven minutes.

The battle between Ger Cafferkey and Benny Coulter was intriguing to say the least and it was a foul on the Down man that created the next score as O'Hare pointed from close range. The match was level when Mark Poland was brought down and O'Hare tapped over for his third score of the game.

A good spell by the hosts saw them take the lead in the 22nd minute when Coulter knocked the ball down to Conor Laverty, who blazed over with the goal at his mercy. Down were very impressive during this period and Ryan Mallon finished an excellent move with a fine point to make it 0-6 to 0-4 by the 29th minute.

This indeed was the last score of the half as Down scored four unanswered points during the latter stages of the opening 35 minutes as Mayo struggled to contain the home side, particularly in the second quarter.

Within 90 seconds of the second half, O'Hare added two points, one from play and one from a free to make it double scores, 0-8 to 0-4. The Down defence was resolute and when they were breached Brendan McVeigh made an excellent save from Barry Moran's shot.

At the other end, good work between Poland and Coulter resulted in the former hand passing over the bar for their seventh consecutive point of the evening. Mayo's first score of the second half came when Conroy made an incredible catch and laid off to Carolan, who kicked his second point of the match to make it 0-9 to 0-5 after 40 minutes.

The gap was down to two when Moran fired over the bar and this was soon followed by Carolan's third of the night as Mayo's direct play was beginning to pay off. A Doherty free made it four in a row for the Connacht side, but more importantly it was a one-point game.

Not surprisingly, it was Mayo who got the next score as Doherty pointed a free to draw the game, but Down responded swiftly when O'Hare scored his fifth point of the night to make it 0-10 to 0-9 after 58 minutes.

The impressive O'Hare lifted the home support when he kicked an outstanding point from the sideline to put the Ulster side two points in front with just ten minutes remaining.

A converted free for Mayo left just one point between them again and it was set up for an intriguing last ten minutes. With five minutes to go and the Westerners were level when O'Malley kicked a long range free.

Defences were on top for the remaining few minutes, but when Down were awarded a free from the 45 metre line, there was only going to be one outcome as O'Hare kicked his eighth point of the night to make it 0-12 to 0-11 in the 70th minute. The Down corner forward was in outstanding form and he kicked the score of the night from play to double their lead.