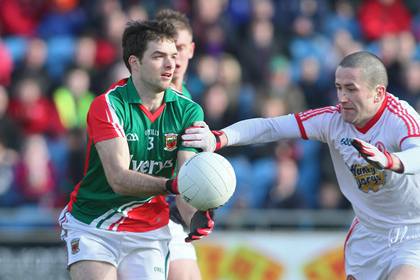 There was drama aplenty in the closing stages of this Division 1 clash in Castlebar today with a Stephen O'Neill penalty denying the hosts at the death.

Mayo produced a late rally to draw level with a goal from Keith Higgins and point from Donal Vaughan.

Two pointed frees from Jason Doherty looked to have secured the points for James Horan's men but Red Hand County captain O'Neill had the final say when dispatching a 75th minute penalty to the back of the Mayo net.

Doherty and Lee Keegan posted early points for the hosts before Peter Harte got the Red Hand County off the mark.

Doherty raised another white flag for last year's All-Ireland finalists but points from Sean Cavanagh and Harte tied the scoreboard after 17 minutes.

O'Neill pushed the visitors in front for the first time but that score was cancelled out by Doherty before NIall Morgan sent over a brace to give Tyrone a slender 0-6 to 0-4 interval lead.

Doherty kicked the first point of the second half and Kevin McLoughlin restored parity with a converted free.

Half-time substitute Martin Penrose put Tyrone back in pole position and Cathal McCarron then doubled their advantage, 0-8 to 0-6.

A second McLoughlin point left the bare minimum between the teams but Tyrone pulled four clear courtesy of points from Conor McAliskey, Cavanagh and Darren McCurry,

Higgins' goal sparked a Mayo revival but it proved to be of no avail.