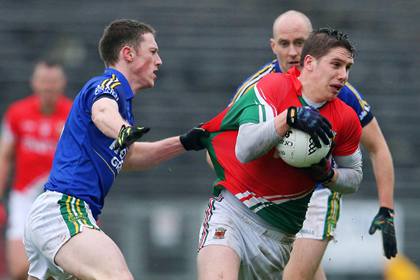 Kerry failed to score in the second half as Mayo opened their Allianz League campaign with an impressive win at Elvery's McHale Park.

Few could have predicted that the home side would have it so easy in the second half after a lively opening period which finished with the teams level on 0-9 to 1-6. But astonishingly, Kerry - who had midfielder Anthony Maher sent off on a second yellow card in the 49th minute - went all of 42 minutes without scoring as Mayo repeated last year's semi-final victory over the Kingdom with plenty to spare.

So it's a case of back to the drawing board for new Kerry manager Eamonn Fitzmaurice whose side had led by 1-6 to 0-7 before two late points ensured Mayo of parity at the break. James O'Donoghue scored the game's only goal in the 17th minute, but the Munster side failed to build on that and they will need to show a vast improvement if they are to get anything out of next weekend's encounter with Dublin.

Both sides showed changes from their selected line-ups with Peter Crowley, Conor Cox and James O'Donoghue replacing Jack Sherwood, Paul Geaney and Barry John Keane in the Kerry team and Colm Boyle coming in at centre back for Donal Vaughan in the Mayo team.

Kerry had wind advantage in the first half, but the hosts were first to score through full forward Jason Doherty after 40 seconds. Michael O'Donoghue brought the Kingdom level in the fourth minute before Doherty took centre stage by slotting three frees between the sixth and 12th minutes, the pick of which was a long-range effort off the ground.

Johnny Buckley, who was Kerry captain for the day, converted a '45 in the 16th minute before James O'Donoghue ran onto a Darran O'Sullivan knockdown and planted the ball in the bottom left-hand corner of David Clarke's net to give the visitors a 1-2 to 0-4 lead. Barely two minutes earlier, Clarke had denied the same player with a brilliant save and O'Donoghue failed to hit the target when the rebound broke kindly to him.

Converted centre forward Richie Feeney brought Mayo level in their next attack, but Kerry hit back with scores from James O'Donoghue and Darran O'Sullivan. Mickey Conroy fired over two excellent points in the space of 60 seconds to tie up the scoring for a third time, 0-7 to 1-4, after 25 minutes.

A monstrous Anthony Maher effort restored Kerry's lead before young Conor Cox made it 1-6 to 0-7 on the half-hour mark. But points from Doherty (free) and Kevin McLoughlin ensured the hosts of parity at the break.

The Connacht champions never looked back after McLoughlin edged them back in front from a free just after the restart. Mayo were leading 0-11 to 1-6 when Maher was yellow-carded for a second time following an altercation with Aidan O'Shea, who was also booked.

Kerry's heads visibly dropped after that as Mickey Conroy and sub Enda Varley (two) tagged on scores to wrap up a surprisingly comfortable win for James Horan's men.