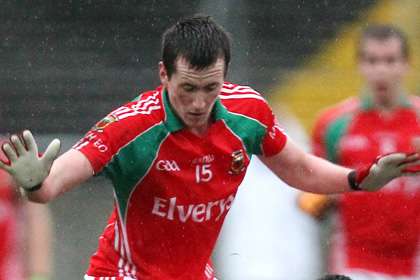 Ballintubber's Cillian O'Connor
Having waited 99 years to claim their first Mayo SFC title, Ballinatubber have now won two in the space of 12 months after edging out Castlebar Mitchels in yesterday's final at McHale Park.

Last year, Ballintubber had three points to spare over their town opponents, but this time just the minimum separated the sides at the final whistle. And how fitting that on the same weekend as he was crowned Young Footballer of the Year, Cillian O'Connor should prove to be Ballintubber's match winner with a personal haul of 1-4. In spite of this, the man of the match award went to Castlebar midfielder Barry Moran, who was had a powerful game and certainly didn't deserve to finish on the losing side.

Kirby had the ball in the Ballintubber net inside the first minute after a move that stretched the length of the field before O'Connor steadied the champions with their opening score from a 50-metre free in the sixth minute. However, Castlebar continued to hold the upper hand and when Neil Lydon pointed from an acute angle in the 16th minute, they were 1-3 to 0-2 in front.

But Ballintubber then suddenly came to life by scoring an unanswered 1-3 which laid the foundations for their victory. O'Connor's goal made it 1-2 to 1-3 and by half-time, Anthony McGarry's charges had nudged ahead (1-5 to 1-4).

The impressive Alan Dillon extended Ballintubber's lead in the 41st minute, only for Kevin Filan to bring Mitchels level again with two frees. O'Connor showed his class once more by grabbing the next two points from play before Castlebar battled back again through scores from Kirby and Filan (free) to restore parity at 1-9 apiece.

However, Ballintubber weren't to be denied as substitute Damien McGing fired over the winning point with three minutes to go.