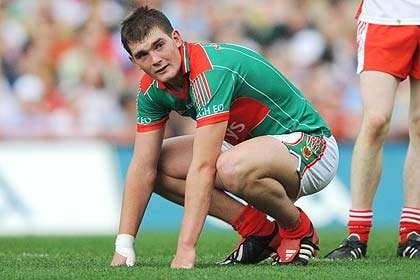 Mayo's Aidan O'Shea
Roscommon dug out a hard fought win to book their place in the Connacht under-21 football championship semi-final at the expense of Mayo at McHale Park on Saturday.

Both sides fielded strong teams with Mayo senior star Aidan O'Shea giving an exceptional display in the middle of the park and was named Man of the Match, although it was scant consolation for the player's efforts.

Roscommon are the defending champions and they were not going to relinquish their title too easily, even though it looked as they might as Mayo lead by 0-9 to 0-8 with just five minutes remaining, but to their credit, they reeled off three points without reply to book their place in the semi-final.

The Rossies took the lead early on as Shane Regan pointed two frees before Mayo opened their account through Cillian O'Connor when he pointed a free after O'Shea had been fouled when racing through from midfield.

Again an O'Shea run yielded another Mayo point as the senior star ran through the middle and slotted over, but Roscommon were finding the target and Scott Oakes, Darren McDermott and Paddy Brogan helped push them four points ahead but O'Connor and O'Shea pointed for Mayo to leave it 0-6 to 0-4 at the break.

Mayo introduced Darren Coen during the interval and he opened the scoring with a nice point to leave just one between the sides and O'Connor leveled just two minutes later. Nonetheless, it was Roscommon that stepped up a gear and two points from the boot of Regan pushed them in front yet again.

As has been the case with many Mayo teams, their shooting let them down at stages and in particular during the third quarter when they dominated possession, but could convert it into scores.

However, they did manage to draw level when an O'Connor free and substitute James Cafferty restored parity. Then with five minutes remaining Coen put Mayo in the lead, but Cathal Shine, Niall Daly and Oakes kicked exquisite scores to break Mayo hearts.