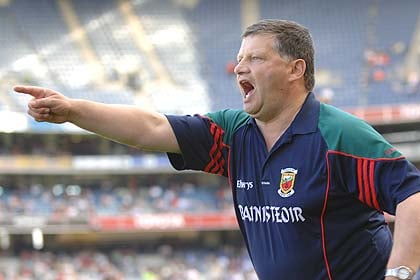 Former Mayo manager John O'Mahony
John O'Mahony is surprised that Mayo have been installed as hot favourites to beat Meath in Sunday's All-Ireland SFC quarter-final. The Westerners have a poor championship record against the Royals, having failed to beat them since the 1951 All-Ireland final, but what concerns O'Mahony even more is the momentum Eamonn O'Brien's side have built up in the All-Ireland qualifiers. "Dublin were favourites to beat Kerry on Monday and look what happened there," the Mayo manager said in the Irish Independent. "I have always held the view that the All-Ireland quarter-finals are brand new competitions and especially when provincial champions are playing a team that has come through a few rounds of the qualifiers as opposed to one. "We put a big focus on winning Connacht this year and it was only when we achieved it that we thought about what was coming next. It was great to win Connacht and there's no doubt it has boosted confidence levels, but we're now up against a Meath team that has won four qualifier games." O'Mahony recalls how a run in the 2001 All-Ireland qualifiers proved the springboard for Galway's All-Ireland success when he was at the helm. "I remember how things improved in Galway with each game in the 2001 qualifiers so that by the time we reached the All-Ireland quarter-final, we had forgotten about losing in Connacht. It will be the same with Meath now. It seems an awful long time ago since they lost to Dublin in Leinster." Tweet