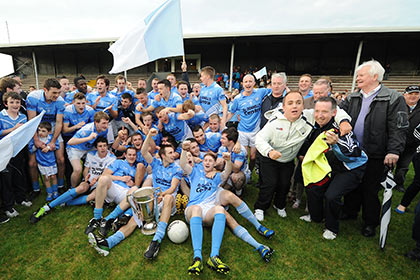 Newtown Blues are once again the Kings of Louth GAA as they defeated Cooley Kickhams to lift the Joe Ward Cup for 20th time in their long and proud history.

The peninsula side went into the game hoping to end their long run without a Senior title and an impressive start suggested the Joe Ward might be heading back to Fr McEvoy Park.

However, a well-taken Andy McDonnell goal midway through the first half proved to be a turning point. That score settled his team and from that stage they were the better side and ultimately deserved a victory that allowed Stephen Moonan lift the cup on behalf of his side.

The game took a while to get going and after ten minutes the teams had just a point apiece to show for their early efforts with Patrick Sheelan for Cooley and Newtown Blues Hugh McGinn getting their sides off the mark.

Although the Blues had looked the brighter team in the early exchanges it was Cooley who took control of the match Brian Donnelly and Ciaran Sheelan scoring two excellent points in quick succession to give the men in green and gold a two point cushion.

After fifteen minutes Blues forward Robert Carr had a glorious chance to grab the game's opening goal but he dragged his shot badly wide after being put clean through by Keith Lynch. The Blues wides were adding up and they were made pay for their missed chances when Patrick Sheelan and Aoghan McGuinness score two points in quick succession to put the peninsula men 0-5 to 0-1 ahead.

Blues were on the ropes this stage and needed to find inspiration to get a foothold in the match. That inspiration duly arrived almost immediately in the form of Andy McDonnell who burst through a porous Cooley defence to blast the ball past Neil Gallagher to leave the Blues just a point in arrears.

That goal seemed to lift the Blues team and they were in complete control for the next five minutes as Colm Judge, Derek Kierans, Andy McDonnell and John Kermode all raised the white flag in a devastating scoring burst. Conor Rafferty had been a doubt for Cooley coming into the game and he was really struggling now in midfield as the Blues attacked again and again.

As the half time whistle sounded it was the Blues supporters who could be heard cheering loudly as their team went in 1-5 to 0-5 ahead at the break.

Cooley made two changes at the break as the struggling Conor Rafferty and Darren Marks were taken off. Cooley needed a couple of quick scores to get back into this contest and they duly arrived with the two Brians scoring points in quick succession with Donnelly's long range effort preceding White's accurate free.

That left just a point between the sides and the sides were soon level when substitute Sean McDonald finished off a lovely team move much to the delight of the Cooley supporters.

The Blues management felt a change was needed to stem the Cooley comeback and they brought Conor Brannigan in at corner forward to replace Robert Carr. That move reaped dividends in spectacular fashion as with almost his first touch of the ball Brannigan blasted the ball home for the Blues second goal of what was turning into a pulsating contest.

That goal seemed to sap the energy of the Cooley team and in the blink of an eye they were five points down when Hugh McGinn and Keith Lynch both raised the white flag to give their side a crucial cushion.

With the game now entering its final ten minutes the Cooley team looked completely spent and they were being beaten to the ball all over the park by a rampant Blues side.

The Blues were now in complete control and they could have had a third goal as first Andy McDonnell and then Conor Brannigan blasted narrowly over the bar to extend the Blues lead to seven points.

A couple of Brian White frees reduced the deficit late on but fittingly man of the match Andy McDonnell had the final say as he scored a majestic point from the narrowest of angles to seal a well deserved eight point victory for the Drogheda side thus winning their first Senior championship since 2008.