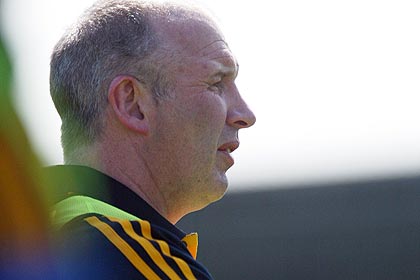 Glenn Ryan during his time as Longford senior football manager
Glenn Ryan admits that being handed a home draw is critical to Longford's chances of defeating Mayo in the All-Ireland football qualifiers.

While the midlanders failed to sparkle against Louth in their Leinster championship exit, they are sure to be a different proposition at Pearse Stadium and many see the potential for an upset in this fixture. Longford ended Derry's championship interests at the venue in 2006, while they have also come close to shocking Dublin and Kerry there in recent years.

"The venue was the most important part of the draw, even more than the opposition," Longford boss Ryan told the Irish Examiner.

"We're glad to be playing the first game in Pearse Park. It definitely help but we know that we will be up against it with Mayo."

With star forward Brian Kavanagh expected to return from injury, Ryan has further cause for optimism.

"The lads are all looking forward to it. The game against Louth was a big disappointment, but hopefully we've put that behind us and we'll be able to give the Mayo game our best shot.

"We gave the lads a few weeks off after the defeat and they have all applied themselves well since we got back to training. It's been a good couple of weeks and we're looking forward to getting back paying again." Tweet