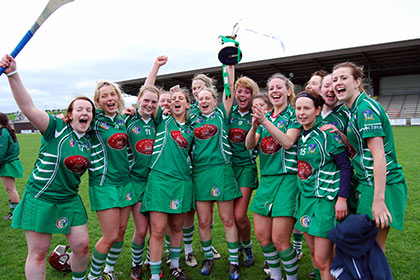 The final scoreline does not reflect the competitive nature of the match and though Limerick led from the 3rd minute a combative Kildare team kept in touch until the later stages of the game when a Limerick goal blitz but the game beyond doubt and ensured the title returned to Shannonside.

Limericks Niamh Mulcahy was the first on the scoresheet with a point from a free in the 3rd minute. Caoimhe Costello and Dymphna O'Brien added two more points from play before Kildare got their first point of the game. Two more frees were popped over the bar by Limericks centre-forward Mulcahy before Kildare got their second score in the 12th minute.
The second quarter of this half saw Dymphna O'Brien add two extra points from play to Limericks tally and a further point from midfielder Sarah Carey. Kildare added two more points to their total one from play ,the other a free, leaving the half time score Limerick 0-08 Kildare 0-04.

The second half started with both teams freetakers twice trading points form placed balls. However in the 8th minute the referee deemed Kildares Susie O'Carroll was taken down within the square and signalled for a penalty which she took herself and narrowly struck it over the bar. This was swiftly followed by a another point from a placed ball, narrowing the gap to two points: Limerick 0-10 Kildare 0-08.

Limerick appeared to panic at this stage but the introduction of Kileedys Marie Keating for Reecca Delee, who immediately slotted over a point, seemed to settle the team once more. Niamh Mulcahy added a point from a free before the next passage of play saw corner forward Dymphna O'Brien dodge her marker and catch the opposition's goalie unaware and handpassed a goal into Kildare's net.

Kildare added a point from a free to reduce the deficit once more before Mary O'Callaghan (who scored 3 goals in the semi) showed her class by rattling the Kildare net. Niamh 'Mul' tacked on two more points, one from play, the other from a free. Kildare bravely battled on trying to counteract the Limerick attack but supersub Marie Keating broke Kildares hearts by striking the sliotar past the Lilywhites goalie for the third goal of the day for the Shannonsiders.

Corner forward Dymphna O'Brien was named Player of the Match. Well done to Joe Quaid, Ger Sheehy and Ann Herbert and all involved in this team's success. Luimneach Abú!