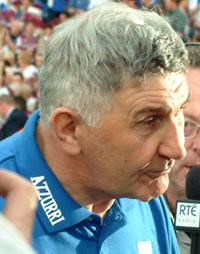 Mick O'Dwyer
The Laois county board is to appeal Mick O'Dwyer's touchline ban to the Central Appeals Committee on Wednesday night, August 9. The O'Moore County was shocked to learn that the ban had been imposed on him by the Central Disciplinary Committee last Friday, arising from two alleged pitch incursions during Laois' All-Ireland qualifier win over Offaly last Sunday week. He had earlier been warned over his conduct during the Laois-Tyrone tie at O'Moore Park. The ban means that O'Dwyer won't be able to take his place on the sideline for next Sunday's All-Ireland quarter-final against Mayo, but Laois chairman Dick Miller said every effort will be made to have the decision reversed. "Everybody knows how much Mick O'Dwyer has put into football all his life and It's a pity that this should happen to him now. We can't understand it," Miller said. The Kerryman, who has been in senior inter-county management since 1974, will be extremely disappointed if the ban is not lifted as he has an excellent disciplinary record. If he is banished to the stands, selectors Gabriel Lawlor, Declan O'Loughlin and Martin Parkinson will take over the main sideline duties. If Laois lose on Sunday, it is likely to be O'Dwyer's last game in charge of the midlanders and he would not want to spend it sitting in the stands. Tweet