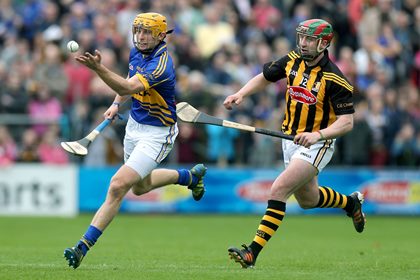 Michael Fennelly's first half haul of 2-3 proved decisive as holders Kilkenny beat Tipperary to capture their 16th Allianz Hurling League title before a crowd of 21,447 at Nowlan Park.

Tipp were one-point winners when the old rivals met earlier in the campaign, but the All-Ireland champions turned the tables after a titanic battle in their home ground. Brian Cody may have been once again absent from the sideline, but the Cats still won the tactical battle with the decision to position match-winner Fennelly at centre forward proving a masterstroke on the part of the manager's right-hand men, Martin Fogarty and Mick Dempsey.

Fennelly gave Tipp centre back Padraic Maher a torrid time during what was a dream first half for the big Ballyhale Shamrocks man. Kilkenny went into the break leading by 2-7 to 0-11 and, while Tipp regained parity midway through the second half, the Cats' extra bit of class told in the final quarter as they ran out deserving winners.

Amid all the excitement, JJ Delaney and Lar Corbett were both sent off in the 45th minute after being involved in a wrestling match in front of the Kilkenny goal. Referee Barry Kelly issued the experienced pair with straight red cards after consulting with his umpires, having brandished a yellow card to Shane Bourke moments earlier.

Both teams lined out as selected with Eoin Kelly wearing the number 20 jersey for Tipp, who had played with the wind in the opening half. But it was the All-Ireland champions who settled much the quicker. Midfielder Lester Ryan pointed from the throw-in before Eoin Larkin doubled their lead from a free.

As already stated, Kilkenny started Michael Fennelly on the '40', and it didn't take long for the tactic to work. The game was just four minutes old when the former Hurler of the Year showed a clean pair of heels to the Tipp defence before crashing home a wonderful goal to give the Cats an earlier five-point cushion, 1-2 to 0-0.

Eoin Kelly opened the visitors' account from a fifth-minute free before Brendan Maher left a goal in it. Fennelly and Maher traded scores to leave it 1-3 to 0-3 with just eight minutes played. Conor O'Mahony and Conor O'Brien picked up yellow cards either side of Tipp's fourth point from Noel McGrath in the 13th minute.

Eoin Larkin uncharacteristically had two wides in quick succession before Seamus Callanan's free made it a one-point game, 1-3 to 0-5, after 20 minutes.

Tipp were rocked back on their heels for a second time a minute later when the marauding Fennelly got away from Padraic Maher again to beat Darren Gleeson at his near post for a cracking second goal. Brendan Maher steadied the Premier boys with his third point from play following a mistake by Paul Murphy, and Eoin Kelly followed up with a trademark point to bring the margin back to two points, 2-3 to 0-7, with 27 minutes played.

Tipp then missed a great chance to take the lead when Patrick 'Bonnar' Maher's mis-hit shot was caught and swept downfield by JJ Delaney. The result was another score from the inspired Fennelly.

Kilkenny centre back Brian Hogan earned a yellow card for a foul on Noel McGrath, and Eoin Kelly found the target from the resultant free. The Mullinahone man landed another free in the 31st minute before Noel McGrath brought the sides' level for the first time, 0-10 to 2-4, with a superb strike from close to the sideline.

Captain Colin Fennelly shortened the grip on his hurl to immediately restore the home side's lead. Tipp 'keeper Darren Gleeson atoned for an earlier miss with a huge free from inside his own half to tie up the scoring for a second time. But Kilkenny finished the half strongly with efforts from Lester Ryan and Michael Fennelly giving them a two-point cushion.

The two Eoins, Larkin and Kelly, traded frees on the resumption before Kieran Joyce popped up from wing back to hit the hosts' eighth point. Shane Bourke and Noel McGrath replied for Eamon O'Shea's men, but an excellent Larkin free from the sideline kept Kilkenny two clear.

Then came the flashpoint involving JJ Delaney and Lar Corbett. When order was restored, Shane Bourke slotted a free and Brendan Maher's fourth point from play brought Tipp level for a third time, 0-16 to 2-10.

Crucially, though, they couldn't get their noses in front as Richie Hogan - who had been anonymous up until then - hit a beauty to restore Kilkenny's lead in the 51st minute. Larkin converted his fourth free before Cillian Buckley soloed through for his first to leave three points in it again, 2-13 to 0-16.

By now, Tipp had made wholesale changes to their attack in attempt to rescue the situation and one of their replacements, John O'Brien, scored with his first touch to keep their hopes alive. A heavy challenge by Paul Curran - who was yellow-carded - on Michael Rice resulted in another rountine Larkin free in the 60th minute.

Padraic Maher narrowed the gap to two again, only for Larkin to slot another placed ball. When substitute Pa Bourke landed a brace of points inside the final five minutes, the Tipp supporters were on their feet, but an impressive Kilkenny weren't to be denied as Lester Ryan scored a third point from inside his own half before Rice put the seal on a three-point victory.