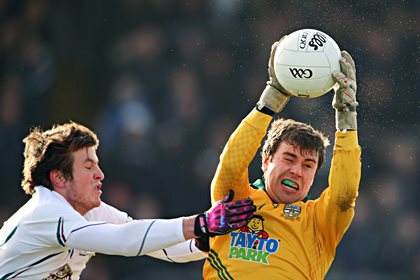 An official attendance of 2,752 braved the elements to see Jason Ryan capture his first piece of silverware since taking the Kildare reins. But the outcome could have been different had Meath not passed up on at least four guilt-edged goal chances.

Wing back Paul Cribbin produced a man of the match performance for the Lilywhites who were never headed. Moolick gave them a dream start when he gave Meath 'keeper Conor McHugh no chance with a cracking goal inside the first five minutes. The midfielder finished and started the move which also involved Eoghan O'Flaherty and Paddy Brophy.

Podge Fogarty made it 1-1 to 0-0 before points from Stephen Bray and Eamon Wallace settled the visitors. Meath captain Kevin Reilly replaced the injured Conor Gillespie before Cathal McNally scored an excellent point on the run to leave the Lilywhites 1-3 to 0-3 in front after 20 minutes.

The Bray and Wallace points could just as easily have been goals, while Mickey Newman also came close to raising a green flag, only for Mick Foley to clear off the line. Following that let-off, Darrach Mulhall replied with a free to give the hosts a 1-4 to 0-6 lead at the break.

At the start of the second half, Davy Dalton was also denied a goal by Mark Donnellan at the expense of a '45 which Newman missed. Paul Cribbin put Kildare two clear before the Royals made a triple substitution in the 45th minute which saw David Bray, Damien Carroll and Graham Reilly all enter the fray.

Mulhall and Newman (free) exchanged points before Kildare went four clear thanks to efforts from Brophy and Mulhall. A Newman free left three in it, 1-8 to 0-8, with 15 minutes to go but back came the home side with a point from Sean Hurley and then Meath had midfielder Andrew Tormey sent off on a black card.

Newman left a goal between the sides again from a '45 with five minutes to go, but Kildare were able to respond through the rampaging Cribbin.

Meath had a late chance to get within a point, but Damien Carroll dragged his shot badly wide as the home supporters celebrated some early-season silverware.