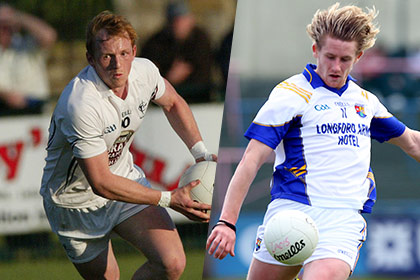 Kildare's Keith Cribben and Longford's Paddy Dowd
Kildare defeated Longford by 2-15 to 3-8 in an enjoyable provincial final at Newbridge.

The first half was nip and tuck and the Lilywhites managed to take the narrowest of leads into the break, 1-8 to 2-4.

Keith Cribbin opened the scoring with a Kildare point but Longford quickly replied through Mark Hughes, who then placed Brendan Devine for the game's opening goal in the sixth minute.

Cribbin replied before Cian Bolton fisted a goal and Hugh Mahon pointed to leave Kildare leading by 1-3 to 1-2 after 15 minutes.

After Cribbin had to retire through injury, Bolton added a Kildare brace but Paddy Dowd's goal from the penalty spot tied the scores up at 2-3 to 1-6.

And Kildare hit two of the last three points of the half to lead by one at the interval.

The second half was nip and tuck until a Cathal McNally goal put Kildare four points ahead, 2-10 to 2-6.

The winners kicked on and led by six points as we went into injury time but the midlanders plundered a late, late goal. Kildare refused to panic and Daniel Grehan kicked the insurance point.