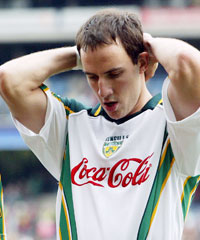 Tadgh Kennelly
Tadhg Kennelly has revealed that he intends to quit the AFL at the end of 2009 so that he can return to Ireland in the hope of winning the Sam Maguire with Kerry. The 26-year-old will have played for nearly nine years with the Sydney Swans when his contract expires at the end of next year and the Listowel Emmets man has decided he will return to Ireland at that time. Kennelly, who sat on the bench as an unused substitute when Kerry lost the 2002 All-Ireland final to Armagh, is committed to lining out with his native county in the quest for an All-Ireland medal. "I'm definitely going home next year to try to win an All-Ireland medal," revealed Kennelly, who is odds on favourite to captain Ireland in this year's International Rules Series. "I will always miss Aussie Rules and I won't cut my ties to Australia, but I want to win an All-Ireland with Kerry." Tweet