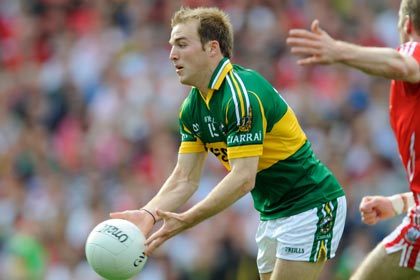 Kerry's Darran O'Sullivan
Kerry supporters are breathing a sigh of relief after it was confirmed that the hamstring injury Darran O'Sullivan picked up against Limerick last Sunday isn't serious.

The Glenbeigh/Glencar clubman was forced to retire just minutes after scoring a cheeky back-heeled goal amid fears that he could miss the rest of the season. But a scan on his hamstring has revealed that there is no serious damage.

It means that the forward should be fit to line out against Mayo in the All-Ireland semi-final on August 21.

In a further boost for Kerry manager Jack O'Connor, erstwhile full back Tommy Griffin could also be available for the meeting with the Connacht champions after recovering from a long-term injury. Griffin has not played for the Kingdom in over a year, but is close to making a comeback after playing three full matches for his club Dingle in recent weeks. Tweet