All the pressure was on Mayo, Ford says 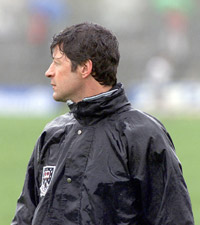 Peter Forde
Galway manager Peter Ford played down his side's impressive Connacht SFC opening round victory over Mayo, suggesting that John O'Mahony's charges may have been affected by the hype that had surrounded them beforehand. "We have been looking forward to this match for months, but there was far more pressure on Mayo going into this one. There was the John O'Mahony factor and talk of an All-Ireland. This is not to say they cannot still do it, but it will be a hard road for them from here," he said. "On the other hand, we did not have to deal with that sort of expectation. We lost our last two championship matches by a point and everything we have done in training over the past few months has been geared towards coming out on the right side of the result on May 20." Cormac Bane's two early goals earned him the man of the match award, but Ford attributed the victory to a fine team effort. "The goals were huge. We would have been level at half-time otherwise, but I thought we played with great passion in the second half. That was really encouraging. "We now have five weeks before we face Leitrim. That means there will be a bit of a lull, lads will go back to their clubs, but we will build it up again for the visit to Carrick-on-Shannon." Tweet