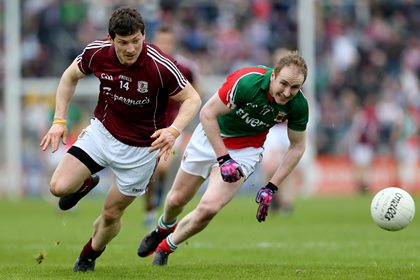 Three-in-a-row chasing Mayo dished out a humiliating defeat to arch rivals Galway in the Connacht SFC at Pearse Stadium today.

Last year's defeated All-Ireland finalists issued a statement of their intent with a masterful team display but it should also be noted that Galway produced little in the way of resistance and it was all too easy for James Horan's men.

It was one-way traffic in the first half and goals from Cathal Carolan, Enda Varley and Donal Vaughan sent Mayo in at half-time with a 3-9 to 0-6 lead.

Any remote chances Galway harboured of mounting an unlikely comeback were undermined when captain Gareth Bradshaw and midfielder Niall Coleman were shown straight red cards following separate incidents in the second half.

The fit-again Andy Moran - who came on as a 60th minute substitute - marked his return from his cruciate ligament ordeal by rubbing salt into Galway wounds when raising a fourth green flag in the 70th minute.

All Star Alan Dillon was called up to the Mayo starting 15, in place of Darren Coen, to start his first game since last year's All-Ireland SFC final defeat to Donegal and he notched the game's opening point in the 2nd minute.

Centre-back Vaughan added a second shortly after before Michael Meehan got the home side off the mark with a well-struck long range free in the 6th minute.

Mayo's third point arrived via a Cillian O'Connor a free, after centre-back Keith Kelly fouled Dillon, but Paul Conroy reduced the deficit to one point - 0-2 to 0-3 - in the 8th minute.

A poor, short kick-out by Manus Breathnach gifted Enda Varley the chance to get his name on the Mayo scoresheet.

Alan Freeman and Meehan (free) then exchanged points before Mayo debutant Cathal Carolan struck for the game's opening goal in the 15th minute.

Carolan displayed impressive soccer skills to place the ball past Breathnach and leave his side 1-5 to 0-4 to the good.

Things got worse for Alan Mulholland's men when a stray free in the Galway defence was intercepted by O'Connor in the 18th minute and the 'Young Footballer of the Year' sent over the bar from close range to extend Mayo's lead to five points.

O'Connor and Dillon continued to torment the Tribesmen's defence and they both increased their respective individual tallies to leave James Horan's charges seven points ahead by the 25th minute.

Five minutes later Galway coughed up possession once again and O'Connor set up Varley for Mayo's second goal and they were 2-8 to 0-4 ahead.

Varley added another point before Cummins sent over Galway's first score in 17 minutes,

It was game, set and match in the 34th minute when Vaughan walked the ball into the Galway net to hand his side a massive 3-9 to 0-5 advantage while a Sean Armstrong (free) brought a miserable opening 35 minutes to an end for Galway.

Galway's nightmare showed no signs of abating at the start of the second half when captain Bradshaw was red-carded following an off-the-ball incident.

Despite playing with 14-men Galway enjoyed their best spell during the third quarter and hit three unanswered points but Mayo had eased their foot off the pedal at that stage.

It took Mayo 13 minutes to register in the second half via a free by O'Connor just before Niall Coleman followed his captain to the sideline for 'punching' Dillon.

The biggest cheer of the second half was reserved for Moran who came on for Carolan with 10 minutes to go.

The second biggest cheer came when he found the back of the Galway net on the stroke of full-time.