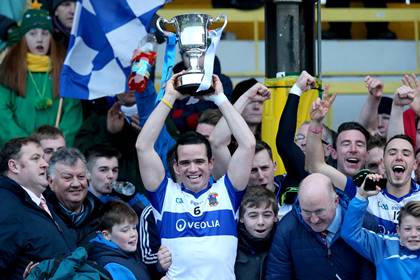 The writing was on the wall for the Offaly kingpins when the Marino men raced into a 1-5 to 0-0 lead with Mossy Quinn scoring the game's only goal in the 11th minute. The dominant Dubs could have had a more three goals before Niall McNamee finally opening Rhode's account in the 22nd minute.

Rhode added another point to trail by six at the break, 0-2 to 1-5, at the break, but Vins remained firmly in control in the second half to run out 10-point winners and set up an All-Ireland semi-final meeting with Corofin in the New Year.

It was all Vincent's early on as Ciaran Dorney had two goal chances saved inside the opening five minutes. In between, Gavin Burke settled them with the opening score as Rhode kicked a couple of poor wides at the other end. Daithi Murphy, Burke and Connolly then combined to set up Quinn for a right-footed finish to the net which eased the winners into a 1-2 to 0-0 lead.

It continued to be one-way traffic with Ruairi Trainor, Quinn and Burke adding points to leave Vins perched on a 1-5 to 0-0 lead after 19 minutes.

After goalkeeper Ken Garry came to his side's rescue once again with a fine save from Dorney, Niall McNamee got Rhode off the mark and Niall Darby followed up with a point to cut the gap to six at the short whistle.

St. Vincent's let a 10-point slip against Garrycastle in the semi-final, but there was never any danger of that happening again as they resumed with three unanswered points from Sligo's Brendan Egan and a pair from Quinn.

Rhode's woes were compounded at this stage by the dismissal of their captain Paraic Sullivan for a second yellow card offence, but they rallied with scores from Conor McNamee and Niall Darby.

However, Vins were able to reply with efforts from Connolly and Cormac Diamond as they closed in on their sixth provincial title.

Niall McNamee and Anton Sullivan reduced the arrears to seven points with four minutes remaining before the All-Ireland champions underlined their superiority with three late scores from Shane Carthy, Diamond and Quinn.