Vodafone pulls the plug on Dublin 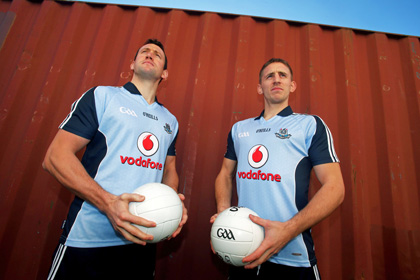 Dublin footballers Denis Bastick and Eoghan O'Gara model the new jersey. INPHO
Dublin will have a new jersey sponsor in 2014 after Vodafone announced that they are ending their title sponsorship of the county.

The move signals the end of the three year deal although Vodafone will continue as an associate sponsor.

In a statement today Dublin Chairman Andy Kettle thanked Vodafone for their support and was positive about the search for another sponsor.

"Vodafone have been excellent partners. They raised the sponsorship of Dublin GAA to a new level by way of the range of activity and support, financial and otherwise, they brought to the table, " said Kettle.

"We thank them for that support over the course of the past three years and in the year ahead. The partnership between Vodafone and Dublin has been one of the most successful and mutually beneficial sports sponsorship of recent times.

"We will go to market in the summer to secure a new sponsor in the confidence that this is by far the strongest county brand and sponsorship property in the GAA and also one of the most coveted and high profile sports sponsorships in Ireland." Tweet