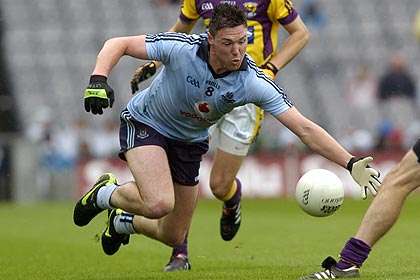 Dublin's Eamonn Fennell
The Dublin County Board has finally ratified the transfer of county midfielder Eamon Fennell to St Vincent's.

Fennell had been seeking a move from O'Toole's for the past four years but had found his path blocked repeatedly at County Board level.

And a year on from a ballot which refused the transfer by a wide margin, the county Board has granted the move.

The result - which went Fennell's way by what was described as "a sizeable majority" - rebuffed the recommendation of the County Board's management committee, which had sought to block the transfer.

Had the deal been denied, the 26-year-old would have faced inter-county limbo. Dubs manager Pat Gilroy stood by the player last year when he played no club football, but a repeat situation this time around would almost certainly have brought a premature end to his inter-county career.

County Board chairman Andy Kettle said, "It's quite a U-turn on last year when management recommended approval of the transfer but the board voted against it." Tweet