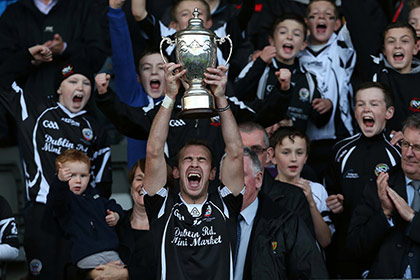 Kilcoo produced a late rally to retain the Down SFC title at Burren's expense in Pairc Esler yesterday.

Burren lost captain Dan McCartan to a red card in the last minute of normal time and their woes were compounded when Kilcoo rattled off three late points to steal victory from the jaws of defeat.

Paul Devlin emerged as his side's hero when pointing a free in the fourth minute of injury-time.

In a low scoring encounter, Jim McCorry's side narrowly shaded the first half exchanges on a scoreline of 0-4 to 0-3.

They trailed by 0-1 to 0-3 after 16 minutes but a late scoring burst yielded three points courtesy of Ryan Johnston, Conor Laverty and Delvin (free).

Despite failing to register a score for 25 minutes either side of half-time, Burren had managed to put themselves into a match-winning position but they lost out in a photo finish.