Flynn: Murphy is best in the country 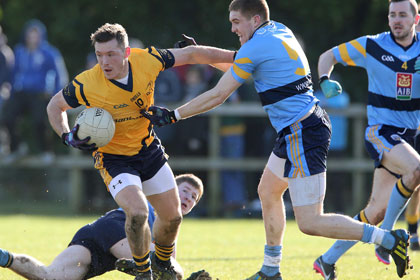 DCU's Paul Flynn tackled by Luke Keaney of UCD during the Sigerson Cup Quarter-Final at DCU Sportsground.
Paul Flynn says Michael Murphy is the best footballer in the country.

The All Stars are team mates on the DCU side that gunned down UCD in their Sigerson Cup quarter-final yesterday and Dublin ace Flynn was quick to praise the latest match-winning contribution from Donegal's 2012 All-Ireland winning captain:

"It's great to see, great to play with someone in such form. He's the best player in the country at the moment," he told HEGAATV. "Some of the points he kicked there the crowd weren't even giving him the credit he deserved.

"I just hope he doesn't carry this form into the summer - I hope he leaves it in the Sigerson." Tweet