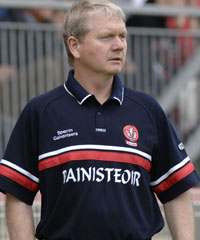 Derry manager Paddy Crozier
Derry football boss Paddy Crozier believes that the Oak Leafers' attempts at unearthing new talent in their Gaelic Life Dr. McKenna Cup campaign has been a success. Speaking ahead of his side's Gaelic Life Dr. McKenna Cup final clash with Down tomorrow night (Saturday), Crozier says Derry's winning run and the emergence of new blood has been a boost to the camp. "It's nice to get on a winning streak, it's nice to keep on winning. We set out at the start of this McKenna Cup to see if we could unearth a couple or three players and see if they could acquit themselves in the National League. "And hopefully we have done that, because we have an awful lot of injuries, some of them very serious injuries. But hopefully these young fellows can come in and do a job for us in the National League." Tweet