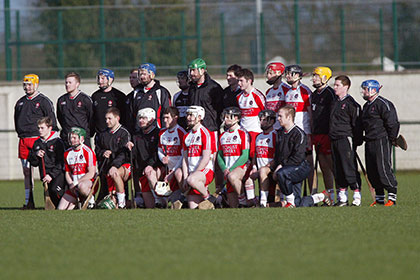 Holders Down have been knocked out of the Christy Ring Cup after a shock one-point defeat to Derry in Owenbeg.

Kevin Hinphey sent over a late winning point for the hosts to foil Down's late comeback which had been given serious impetus when James Coyle netted to leave two points in it, 3-9 to 2-14. Gerard Monan's charges eventually regained parity, only for Hinphey to break their hearts at the death.

Having suffered a 32-point mauling at the hands of Kerry last weekend, not many gave the Oak Leafers a chance of overturning the champions, who had tasted defeat themselves to Meath in the first round. It looked to be going according to script when Johnny McCusker's goal helped the Ardsmen to an early 1-1 to 0-0 lead, but points from Ruairi Convery and Alan Grant settled Derry before Oisin McCloskey netted to give them a 1-4 to 1-3 lead after 23 minutes.

Ger Rogan's side went on to lead by 1-9 to 1-4 at the break, but three unanswered points on the resumption had Down just two adrift after 40 minutes.

Convery replied with a brace of frees and Derry tightened their grip on proceedings when Shane Farren's goal made it 2-12 to 2-8 with 10 minutes remaining.

But Coyle's late strike set up a grandstand finish as the home side held on to reach the quarter-finals.