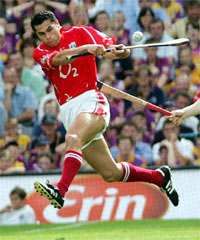 Sean Og O'hAilpin
Sean Og O hAilpin is set to captain Cork in their defence of the Liam McCarthy Cup next year after being nominated for the role by his club Na Piarsaigh. Na Piarsiagh, who as county champions have the right to nominate the captain, put forward O hAilpin's name ahead of his club and county team-mate John Gardiner. O hAilpin had a magnificent year for both club and county (not to mention for his country in the International Rules series) and is seen as the leading contender for Hurler of the Year which will be announced at Friday night's All-Stars banquet in Dublin. O hAilpin will take over the captaincy from Newtownshandrum's Ben O'Connor. Tweet