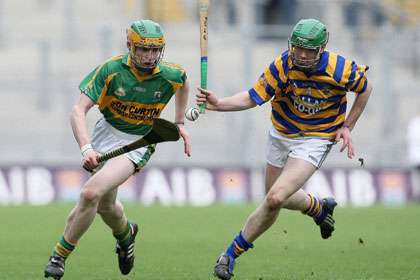 Meelins Eamonn Brosnann gets away from James Power of John Lockes during the All Ireland Club JHC final at Croke Park.
Meelin 0-12
John Lockes 1-5

Meelin played their part on a memorable day for Cork clubs with a fully deserved All-Ireland junior championship final victory over John Lockes at Croke Park on Sunday.

Scores were at a premium throughout a tight and nervy encounter, so when Ger Shelley goaled for John Lockes before half-time it looked like being a crucial score.

However, Meelin recovered well from that concession to lead by two at the break (0-7 to 1-2) and they kept their noses in front throughout the second half.

Lockes battled gamely in the final quarter but could never get closer than three points, and in the end Brendan O'Sullivan's second point of the day ended their resistance.