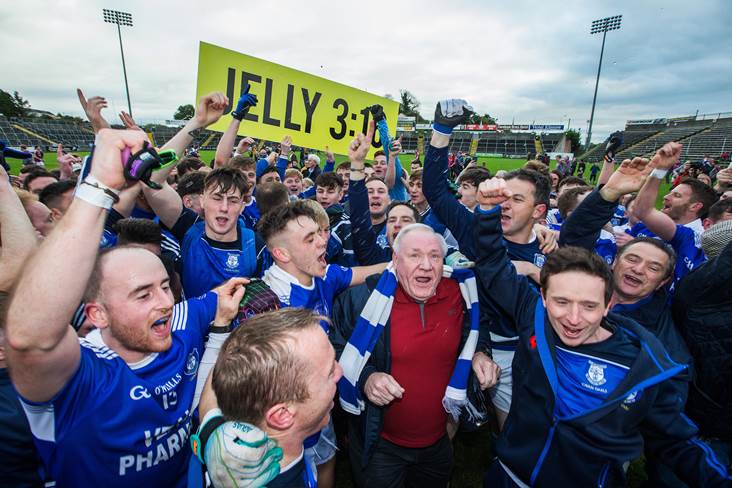 by Shane Corrigan
at Kingspan Breffni

'Man of the Match' Seanie Johnston's 0-5 tally was what stood between the sides at the finish as the Gaels secured their first Oliver Plunkett Cup success since 2014.

Jason O'Reilly's side led from the sixth minute onwards and bossed the closing stages of the first-half to lead by five at the break, with Castlerahan marksman Cian Mackey having missed a 22nd minute penalty.

The Ballyjamesduff outfit landed the first two scores of the restart to keep the heat on their Cavan town counterparts but Johnston stroked over three points (two frees) between the 36th and 49th minutes to keep Donal Keogan's men at bay.

The score read 0-10 to 0-7 with five minutes left in regulation and during those minutes the Gaels reaped points from Barry Fortune, Declan Meehan and Martin Dunne to ensure that it was their captain Micheál Lyng heading for the podium and collecting the coveted silverware on his club's behalf.

Niall Smith shot the Gaels in front after six minutes and with Castlerhan operating with 13 behind the ball, leaving only Mackey and Sean Brady inside, it took the Blues as many minutes to double their advantage through talisman Johnston.

Some patient build up play eventually saw Ronan Flanagan cut through with a slick side-step and release Paul Smith, who blasted over the Gaels' crossbar in the effort of a goal.

Johnston hit back immediately for O'Reilly's charges and their lead would be at three on 19 minutes after midfielder Robert Maloney-Derham took a delivery from Andy Graham and swung over, punishing a misplaced pass in Castlerhan's half-forward line.

Cormac Daly rifled over from the same 45-metre line to make it 0-4 to 0-2 and the Ballyjamesduff side looked like arriving at their first lead with eight minutes to go in the half.

Terrific work from Flanagan and Brady put Daniel Lynch through on goal and as he looked to pull the trigger Ciaran Flynn dragged him down, leaving referee Gerry Sheridan with no option but to wave horizontal arms.

Mackey was the man they entrusted and he went high with his penalty into the town end goal but stroked wide, leaving the favourites to take full advantage with the last three scores up to the interval.

Keogan introduced speedy forward Oisin O'Connell to the fray for the second-half but before Sheridan could throw in the ball a minor melee broke out in front of the Castlerhan goal, resulting in cautions for Johnston and marker Stephen Cooney only.

O'Connell pulled off superb work from left corner-forward to trim his side's deficit down to four three minutes into the resumption and a perfectly weighed '45' from Oisin Kiernan would ignite a mighty roar from the Ballyjamesduff contingent.

The trailers were in the hunt for their third score in-a-row when they hit a sea of blue jerseys trying to cross the 45 and the Gaels broke ferociously, feeding that man Johnston, who claimed his 10th county title here, inside and the Cavan forward squeezed over brilliantly from an acute angle.

Mackey and Johnston traded frees prior to Sean Brady making it a three-point game headed into the final quarter of an hour which the Gaels saw out with expertise.

Johnston's fifth (free) had the Terry Coyle Park men 0-10 to 0-6 in front with 11 minutes to go and while they lost wing back Levi Murphy to a second yellow card, points from their excellent centre-back Fortune, sub Meehan and Dunne followed to seal the deal.

Castlerahan would go down to 13 with the dismissals of Daly and Cooney in injury-time and Kiernan's long range effort only provided them consolation in the end, as the Gaels were home and hosed with their 14th crown safely in the bag.