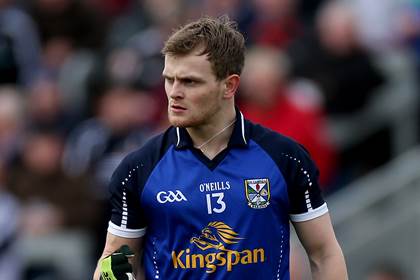 Enda Reilly was Cavan's top scorer with six-points.
©INPHO/James Crombie.
Cavan came away from Pearse Park as kingpins of Leinster following a 1-11 to 1-7 victory over Longford.

The Breffni County led by 0-6 to 0-4 at half time, having enjoyed a five-point lead with just seven minutes left before the interval.

Another brace of Reilly frees stretched the gap to four by the 17th minute and Paul O'Connor got in on the act six minutes later to make it 0-6 to 0-1.

But Jack Sheedy's men found their stride before the break and reeled off three unanswered points from Ronan McEntire, Diarmuid Cooney and Barry McKeon.

It was a one-point game when Rory O'Connor smacked over a delightful Longford point in the second minute of the second half. Brian Farrell equalised - Longford's fifth consecutive point!

Reilly restored Cavan's lead on 40 minutes but McEntire replied before Tom Hayes fisted the Ulster county back ahead at the start of the final quarter, 0-8 to 0-7. Liam Buchanan and Reilly pointed to stretch the gap to three.

Paul Smith's goal eight minutes from the end doubled the gap and put the match out of Longford's reach, 1-10 to 0-7.

O'Connor tagged on a free and Andrew Dalton's last-minute goal made no difference to the outcome as the Breffni County were crowned Leinster champions and the silverware went north.