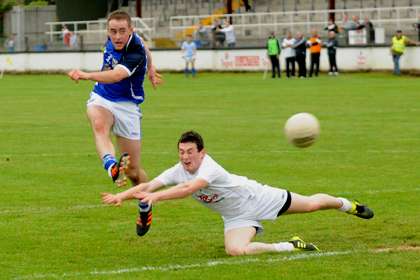 Cavan made history in Newbridge last night when they defeated holders Kildare to land their first ever Leinster junior football title.

It was a case of third time lucky for the Breffnimen who had lost the last two finals, including last year's to the Lilywhites. Conor McClarey's goal helped the visitors to a 1-5 to 0-6 interval lead and they pulled away in the second half to take the title out of Leinster for the first time.

Kildare made the brighter start and led by 0-3 to 0-0 after 10 minutes before Cavan clicked into gear and scored 1-4 without reply. McClarey drilled the ball under Kildare 'keeper William Clinch for the only goal after receiving a pass from Martin Dunne.

Cathal McNally and Seamus Hanafin replied with points to leave the hosts two down at the break, but Cavan took a firm grip on proceedings midway through the second half thanks to four unanswered scores from Declan McKiernan, Paul O'Connor (two) and Dunne.

The Lilywhites then had Darren Barker sent off and Dunne sealed the deal with a late brace of points for the winners.