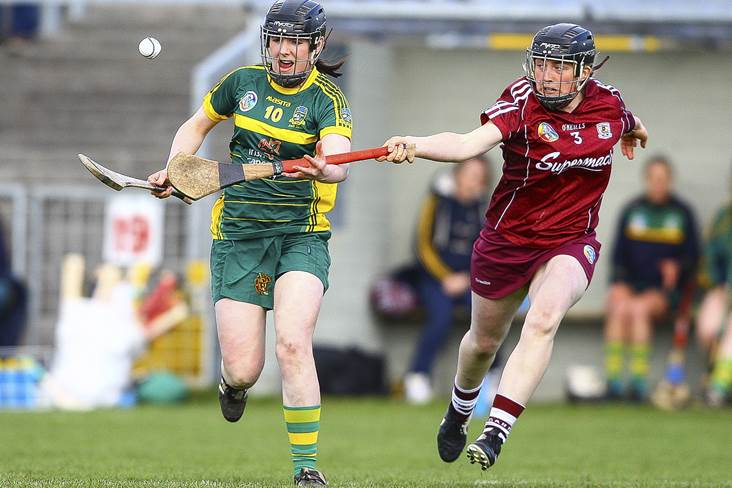 Meath will get a taste of top tier camogie next year after outlasting Galway to be crowned Irish Daily Star National League Division 2 champions at St Brendan's Park, Birr.

It was a much sterner examination than many had predicted, given that Meath had prevailed by 18 points when the sides last met on March 20, but Galway's defeat of Kildare in their semi-final signalled the progress made by the westerners' second string.

This performance and result provided further testimony to their likely competitiveness in the intermediate championship but it was Meath that had the most tangible reward when the silverware was handed out after the final whistle.

It represents a tremendous achievement in particular by manager John Davis, who was in charge as Meath rose from Division 4 to Division 2, and after taking a brief sabbatical, returned last year to lay the groundwork once more for taking the next step this term.

Jane Dolan has travelled a similar journey and not for the first time, she was Meath's leading scorer with five points, although Lorraine Coen is entitled to be pleased to have held the Blackhall Gaels maestro to just a point from play.

Dolan did have an impact in general play though and was well supported by Megan Thynne, while the half-back line of Áine Keogh, Cheyenne O'Brien and Louise Donoghue proved effective defensively and as a kickstart to many Meath attacks.

The Royals appeared nervous early on and Rachel Monaghan opened the scoring for Galway with a pointed free.

Aoife Minogue levelled but the Tribeswomen had Lorraine Farrell operating effectively as a third midfielder and the Davitts player was involved in the move that ended with a resounding finish by Rachel Monaghan for a goal, after Amy Caulfield's diagonal pass.

It says much for Meath that they began to settle despite this setback and scored the next four points, including three from Dolan, to move ahead entering injury time.

Remarkably, we had two goals before the interval. The first came for Meath, as Aoife Maguire's shot for a point from 45 yards out flew all the way to the net, but Galway responded from the puckout via substitute Marie Farrell to trail by just one at the break, 1-5 to 2-1.

Meath had just that bit more firepower though, as Dolan slotted a couple of frees, before Thynne and Sinead Hackett confirmed the verdict.