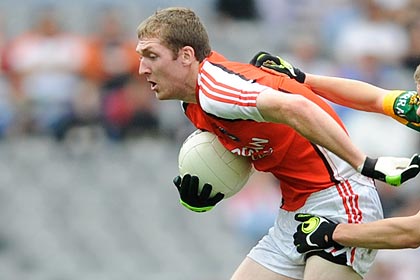 Armagh's James Donnelly
Sunday's ESB All-Ireland minor football final can't come quickly enough for Armagh midfielder James Donnelly. "It will fly in now and I can't wait for it come around," the Killeavy clubman said ahead of the Croke Park showdown with Mayo. "It will be good to get out and get going. Obviously, it went well for ourselves in the middle against Kerry, but we have quality all over the pitch. It's about getting your hands on the ball and getting it into the three boys in the full forward line, because they are three quality players. "Not a lot of people gave us a chance at the start of the year. Yeah, we won the (Ulster) league, but we had Tyrone in the first round and they were league, Ulster and All-Ireland champions last year. "We knew it was going to be tough, but we got over that and got the belief in the squad. We didn't look past it and took it one game at a time. We always prepare for a tough battle, we have had some tough games, but there is just one more to go now." Donnelly says Armagh are expecting a physical challenge from Mayo, who were last year's beaten finalists. "We know they are a very big side, they are likely to be physical. "They also lost out in the final last year, so that may give them a wee edge. There are boys there who played in that final and they will have that bit of experience from that - plus they won't want to lose two finals in-a-row." Tweet