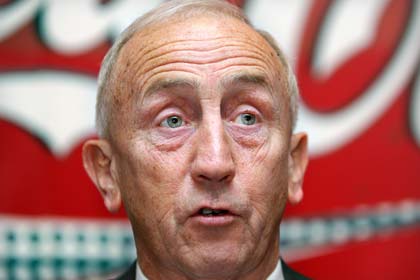 Sean Boylan
Sean Boylan won't be allowing his name to go forward for the vacant Armagh football manager's post. It follows reports that the former Meath manager and current Ireland International Rules boss was the preferred choice of the Armagh players to succeed Peter McDonnell. But while flattered to be linked with the job, Boylan insists that he won't be returning to inter-county management. "It's the first I heard of it to be honest, but it isn't something I'd consider," the Dunboyne man said. "Armagh is a great football county and it's very flattering to be talked about in connection with the job. But a position like that is almost a full-time job these days and I simply haven't time to commit to it." Senior Armagh players met with the county executive last night where a new plan was agreed to find Peter McDonnell's replacement. It is expected that clubs will be asked to re-nominate candidates for the position and a new sub-committee will be formed to select the new manager. Tweet