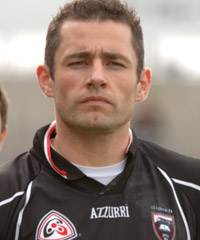 Sligo's Eamonn O'Hara
Sligo talisman Eamonn O'Hara has expressed his deep disappointment at Sligo's fall from grace over the past 12 months. Last year's Connacht champions were condemned to the Tommy Murphy Cup on Sunday following their heavy provincial semi-final loss to Mayo and their earlier relegation to Division 4 of the NFL, and former All-Star O'Hara admits that it's all very disheartening. "It's very, very disheartening," he said. "To think we have gone down to this level is embarrassing and disappointing at the same time." O'Hara felt a missed goal opportunity at the start of the second half, when the Yeats County were still in contention, was the turning point in Sunday's game. "We had a very good chance at the start of the second half. The ball bounced up to Brendan Phillips and he forced into - whoever it was - but they didn't stick it. "That was really disappointing." The long-serving Tourlestrane clubman is one of a number of Sligo players who are likely to consider their inter-county futures in the wake of this year's poor showing. Tweet