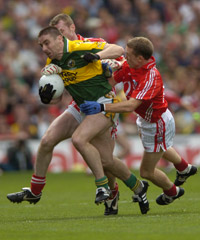 Kerry's outstanding Dara O'Se
Kerry ace Darragh O Se has knocked any suggestion that he may retire but confirming that he committed to the green and gold at least for one more year. The An Ghaeltacht star informed Kingdom boss Pat O'Shea yesterday (Tuesday) that he is ready, willing and able to help steer Kerry to a possible three-in-a-row of Sam Maguire Cup triumphs. It is likely though that the county's talisman will miss Kerry's opening three NFL matches against Donegal, Tyrone and Derry. There had been doubt about the four time All-Ireland winning midfielder's participation this year after he admitted that he would not continue if his appetite for the game waned. "The main thing is appetite," stressed O Se when quizzed about his future late last year. "That when you get up in the morning you look forward to it. I don't want to overstay my welcome and I am conscious of that as well. There are a lot of young fellows in the county waiting to come in." Tweet