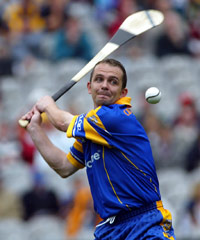 Davy Fitzgerald
New Clare hurling manager Mike McNamara fears that the horrific finger injury suffered by veteran goalkeeper Davy Fitzgerald could end his career. McNamara's recent appointment in succession to Tony Considine prompted speculation that Fitzgerald could make a return to the Clare colours in 2008. However, the former All-Star's hopes of playing for the Banner County again suffered a big setback when he underwent surgery to re-attach the top of his finger after sustaining a blow in Sixmilebridge's recent SHC semi-final defeat to Crusheen. "With an injury like that, there has to be a worry that it might prove career-threatening," McNamara said. "But hopefully it won't end Davy's involvement in sport." While noting that time is not in Fitzgerald's favour, McNamara has refused to rule out the possibility of the twice All-Ireland winner featuring in his plans next year. "Admittedly, Davy will be 37 next year, but that's not to say that he won't have a chance of being involved with Clare again, provided he receives the medical all-clear." Tweet