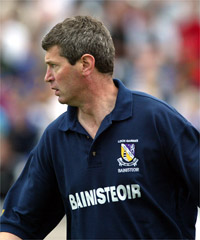 John Conran
Leinster manager John Conran has called on the GAA authorities to move the inter-provincial series to November and to ensure that the ailing competition is given better TV exposure. "I don't think we're marketing it correctly," he said ahead of Saturday's inter-provincial hurling final between Leinster and Connacht at Pearse Stadium. "It's not on television, which is unfortunate. Instead, they are just trying to get it out of the way. It needs to be looked at in a more positive, proactive light. "Players love playing in it, it is still an honour to represent one's province and the advent of lights should ensure a slot can be found for it. It can be marketed on its own. "November would be an ideal month for an expanded version of the competition to be run off. October is taken up by too many county finals. There would be more players available as well in November," the former Wexford boss added. Tweet