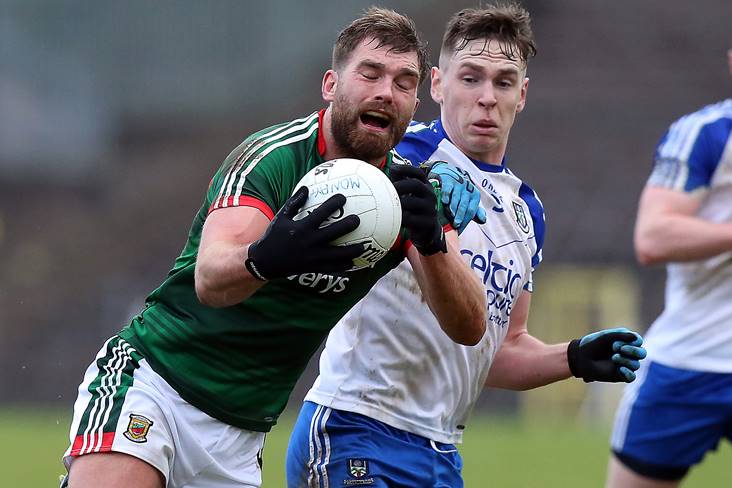 Paddy Durcan's late point gave Mayo a dramatic 0-13 to 0-12 victory over Monaghan in a grueling encounter at Clones.

The game looked to be heading for a draw until the Castlebar Mitchels clubman speared over the winning state rike four minutes into additional time, while the hosts finished the game with just twelve men on the field.

There was nothing to separate the sides before the break as they shared 14 points to turn around with everything still to play for.

Karl O'Connell registered first for the Farney County on two minutes and Conor McCarthy added their second point 90 seconds later. A good start for the home team, who had four debutants on show.

The losers started as selected, while Andy Moran, Neil Douglas and Shane Nally came into the Mayo starting XV in place of Conor Loftus, Jason Doherty and Michael Hall respectively.

Shane Garland cancelled out Moran's effort and Jack McCarron replied in kind to an Evan Regan score as Malachy O'Rourke's men led by double scores approaching the midway stage in the first half. But quickfire scores from Regan (free) and Eoin O'Donoghue tied the sides up at four apiece by the 19th minute.

McCarron and Niall Kearns struck at one end; Regan replied with a brace of frees at the other. A Douglas free had the 2017 All-Ireland finalists in front for the first time but O'Connell hit back two minutes from the end of a very competitive first half.

Durcan squeezed Mayo back in front in the 39th minute and a Douglas '45' doubled the difference; a Regan free restored the westerners' advantage 20 minutes from the end after McCarron (free) and Garland had got the hosts back on terms.

Douglas' second converted '45' made it 0-11 to 0-9 and the same player popped over a free with less than 15 minutes remaining. But back came Monaghan with points from McCarthy (two frees) and Kearns, while experienced defenders Drew Wylie and Colin Walshe were thrown into the fray for the last eight or nine minutes. Mayo had sprung Cillian O'Connor from the bench.

The border county were dealt a blow when Ryan Wylie got his marching orders for a clash with Aidan O'Shea two minutes from the end and they were down to 13 men when Barry Kerr also left the action on a second yellow. With virtually the last kick of an enthralling match, wing back Durcan won it for Stephen Rochford's men from the right wing and unlucky Monaghan lost another man when substitute Dermot Malone was shown a late black card.