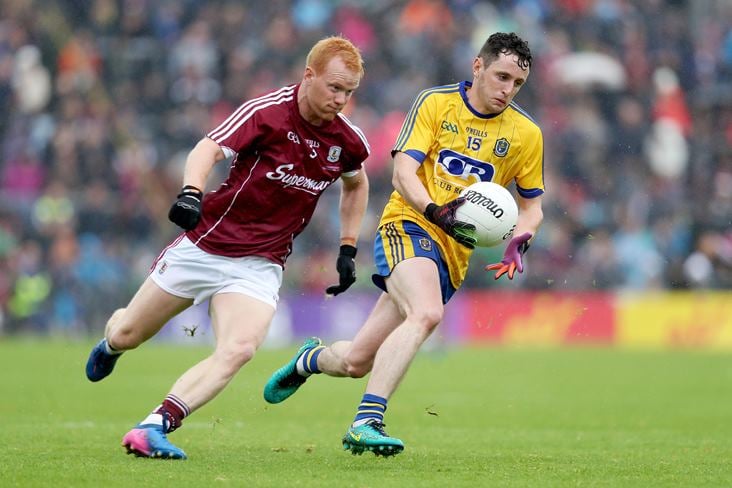 Roscommon collected the Nestor Cup for the first time since 2010 after beating a disappointing Galway by 2-15 to 0-12 at Salthill.

The defending champions were favourites to win their 46th provincial title and move level with Mayo on the Roll of Honour, but slumped embarrassingly on their own patch as the Rossies cantered to a facile nine-point success to rule the western province for the 23rd time. Cian Connolly and Brian Stack netted in either half for Kevin McStay's well-drilled charges, who bossed this one-sided match pretty much from start to finish.

Galway, who never led and failed to score from the 54th minute onwards (including eight minutes of injury time, during which they were reduced to 13 men), can have no complaints after having been comprehensively beaten. While the Rossies progress to an All-Ireland quarter-final in three weeks, the Tribesmen must now take on Donegal in a difficult Round 4A Qualifier on July 22nd.

The winners led by 1-7 to 0-3 at the end of a forgettable first half played in dreadful conditions, with Connolly netting with aplomb in the 14th minute. Playing into the wind and rain, Kevin Walsh's charges were completely at sixes and sevens before the break and managed just one score from play in the opening 35 minutes.

The Rossies opted to start with wind advantage and reeled off the opening three points inside six minutes courtesy of Ciaran Murtagh (2) and Diarmuid Murtagh. Ciaran Murtagh slotted a soft free after Shane Walsh had opened the hosts' account from a free on eight minutes and wing back Conor Devaney hammered over a terrific left-footed effort from play followed by a Diarmuid Murtagh free (after one of many poor Galway kick-outs) as the underdogs led by six points to one with 13 minutes played.

His side's only first-half scorer, Walsh arrowed over Galway's first point from play in the 14th minute but seconds later Connolly gathered a wonderful diagonal pass from Diarmuid Murtagh before sweetly planting a precise low finish into the bottom left corner of the Galway net to make it a seven-point match, 1-6 to 0-2. Completely on top in all sectors, the Rossies were guilty of three poor wides inside the next three minutes with the holders very much there for the taking.

With Enda Smith ruling the airways, Diarmuid Murtagh and full back John McManus added to Roscommon's soaring wides tally - seven bad misses in the opening 20 minutes. At the other end, on the rare occasions that they did get forward, Galway's shooting was every bit as bad, perhaps even worse.

As 18,287 spectators looked on, the Division Two winners were unfortunate in the 26th minute when Michael Daly collected a handpass from Fergal Conroy and drilled a low drive off the butt of the left post, a near miss which was followed by a poorly-executed Walsh free. Walsh fired a shot off the right upright and another to the left of the posts and wide as both sides struggled to trouble the umpires. In the 31st minute, after 17 shocking minutes without a score at either end, Diarmuid Murtagh split the posts with a superb finish to increase the Rossies' lead to eight.

On the stroke of half time, Walsh obliged from the softest of Galway frees directly in front of the posts to leave seven between the sides at the short whistle.

Five minutes after the restart, Stack ran unopposed through the Galway defence to stick a second Roscommon goal in the net - 2-8 to 0-5. Walsh (free) and Damien Comer had landed the first two points of the half for the hosts and Diarmuid Murtagh replied from a free before Stack netted to leave nine between them.

Galway's reaction to conceding that second goal was impressive - six unanswered points between the 42nd and 49th minutes as they closed within three, Conroy (2), Walsh (2), Gary O'Donnell and Daly all on target as they enjoyed the briefest of purple patches.

Diarmuid Murtagh replied from a free awarded for the slightest of touches off the ball at the other end as Kevin McStay's charges led by four points with a quarter of the match left to be played. The Roscommon No.14 then injured himself in the processing of missing a presentable scoring opportunity and had to be removed from the fray.

Comer slotted a superb Galway point in the 54th minute but that would be the holders' last score and Connolly replied with a deft finish 60 seconds later after being picked out by Murtagh's replacement, Donie Smith - 2-10 to 0-12 with 15 minutes left.

Donie Smith teased Roscommon's lead out to five points with a great finish off his left peg with eleven minutes remaining and the No.21 won and converted a free with two minutes left as Galway failed dismally to muster any sort of response to the predicament they found themselves in.

The winners finished the match with 14 men when Connolly got himself sent off for a second yellow-card offence in the 69th minute. The outstanding Devaney stroked over another point from the left wing in injury time and Galway were reduced to 13 men in the 73rd minute as substitute Micheal Lundy (straight red) and Comer (second yellow) were both dismissed as their awful afternoon finished on the worst possible note.

In the fifth of eight additional minutes, Devaney nonchalantly clipped over his third and substitute Shane Killoran completed the scoring on a day that will live in Roscommon memories for many years to come.