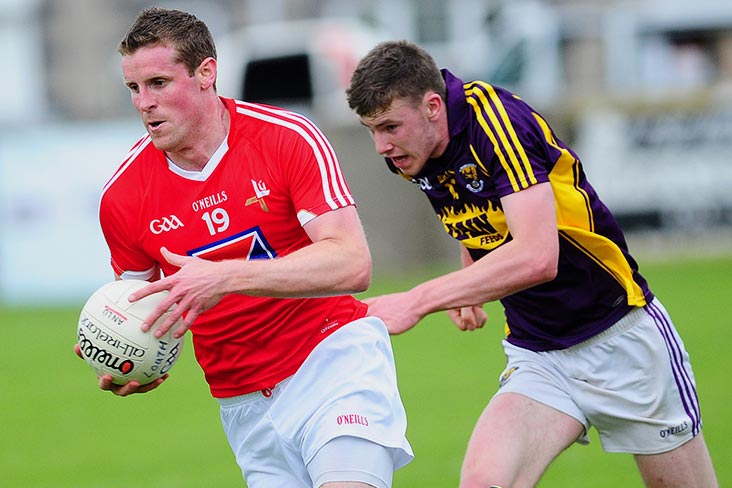 Louth's Ronan Carroll gets away from Niall Hughes of Wexford during the 2016 Leinster JFC final at St Brigids Park, Dowdallshill.

Wexford retained the Leinster junior football championship with a double-scores victory over Louth in tonight's final at Dowdallshill, 2-12 to 0-9.

Sean Ryan and Conor Sinnott proved to be the match-winners as the former netted goals in either half and the latter chipped in with seven points to put paid to the home team's stern resistance.

The Model County led by 1-4 to 0-5 at the interval, Ryan's first major coming in the 19th minute to propel them into a 1-3 to no score advantage. Niall Harney (2) and Ian Carty had floated over the first three points of the night.

Dean Maguire, who also supplied the last score of the half, opened the Wee County's account in the 21st minute and Ronan Carroll registered their second before Ryan swapped points with Daniel O'Connell.

A Darragh Lafferty brace kept the challengers in touch when the action resumed but the Slaneysiders were still three to the good at the three-quarters stage, 1-8 to 0-8, following an exchange between James Stafford and Sean Hand.

A couple of Sinnott frees kept the pressure on Colin Kelly's second string and Ryan's second three-pointer four minutes from the end confirmed that the silverware would be staying in the visiting camp - 2-11 to 0-9. Sinnott added another point as the Purple & Gold, captaind by Paraic O'Keeffe, collected their eighth provincial title at this level and fourth of the current millennium.