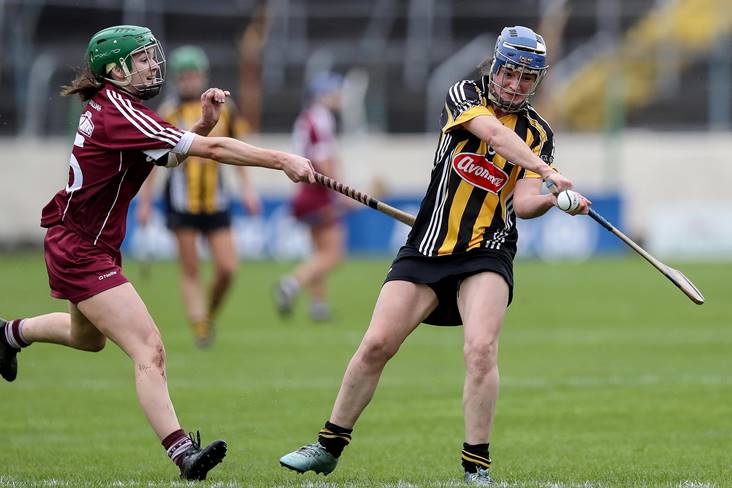 Kilkenny confirmed their liking for Semple Stadium by repeating their final victory at the venue two years ago to claim their 12th Irish Daily Star National League Division 1 title.

Clare were the victims in 2014 and while this final wasn't as one-sided in terms of the final score, there was no questioning Kilkenny's absolute superiority over Galway.

It was a dreadfully disappointing display by Ollie Bergin's charges, who would have been fancied to make it a two-in-a-row and if not, at least push their opponents to the very limit.

They never got going however, and the failure to perform brought a miserable end to a forgettable weekend for Galway camogie, after defeats in the Division 2 and minor A championship deciders.

If patrons arrived looking forward to a potentially explosive individual battle between two of the game's premier midfielders, with all bar one of the eight All Stars between them awarded in those positions, they were to be disappointed.

While some eyebrows might have been raised by Anne Dalton's siting at right half-forward, it wasn't necessarily revolutionary given her previous experience in the role.

The real surprise came in the deployment of Niamh Kilkenny at full-forward, particularly as it meant that goal sneak Molly Dunne was then relocated to left half-forward.

That experiment was dispensed with after around a quarter of an hour, as the Stripeywomen completely dominated exchanges around the centre, where player of the match Anna Farrell especially stood out.

Perhaps Kilkenny (the player) was carrying an injury, as she remained in attack and we saw none of the rampaging runs we are accustomed to. Instead, Bergin moved Aoife Donoghue to midfield in a bid to counteract the Noreside pairing.

It did have some impact and after a woefully lethargic first half, Galway were more competitive in the second, enticing frees from direct running.

It was notable though that their five second half points all came from placed balls, and they managed only one score from play, a Donoghue point from distance in the first half.

The improvement was nowhere near sufficient to effect a turnaround in overall fortunes and Ann Downey's outfit saw the game out comfortably enough, although the former great would have preferred more from her forwards in the latter period than the 1-1 they produced.

She would have been delighted with the manner in which they flew out of the traps though, with points from Julie Ann Malone and Farrell, the latter taking a pass from younger sister Shelly before finishing well.

The Galway goalkeeper should have done better in between however, when Shelly Farrell laid the groundwork once more for Anna, whose dipping shot was miscontrolled into the net in the 11th minute.

It was the 15th minute before Galway got off the mark, with the first of Niamh McGrath's six pointed frees, but Kilkenny were well in control and Dalton fired over brilliantly on the run before Gaule brought her tally to three to make it 1-6 to 0-2 at half time.

The blustery wind continued to make it difficult for players but Galway did resume with considerably more vigour and actually had the margin down to four with less nine minutes of regulation time remaining.

Kilkenny shut the door on them in resounding fashion, with a goal of sumptuous design and construction, involving three delightful stick passes by the two Farrells and Gaule, before Malone launched a rocket high to the corner of the Galway net, giving Burke no chance.

It probably said much for Kilkenny's superior energy levels that they could find a free player at that end of the field on three occasions in the move, despite playing with a sweeper for the second half.

There was no way back for Galway from that.