All-Ireland SFC semi-final: Mayo battle back to draw with Dubs 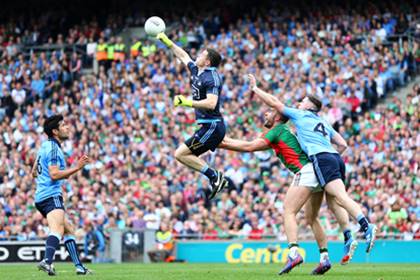 Mayo reeled off 1-4 without reply in the last nine minutes to earn a 1-15 to 2-12 draw with Dublin in a fierce semi-final at Croke Park.

Substitute Kevin McManamon's 57th-minute goal seemed to have propelled the Dubs into the final - especially when they followed up with a trio of rapid points from the Brogan brothers and Jack McCaffrey - but Cillian O'Connor's 68th-minute penalty goal and points from substitute Andy Moran (2), Keith Higgins and sub Alan Freeman dramatically earned the westerners another bite at the cherry.

When the Connacht kingpins started to run at their opponents late on, Jim Gavin's side wilted worryingly. In a bad-tempered match that was full of incident (a lot of them unsavoury; most of those off-the-ball), the Dubs had Diarmuid Connolly shown a straight red card at the death, while there were more talking points than a season of Christopher Nolan movies. Cian O'Sullivan, Jonny Cooper and Philly McMahon might also have taken early baths.

Connolly's fifth-minute penalty gave the Leinster champions a 1-7 to 0-7 interval advantage, with six of Mayo's first-half scores accruing from Cillian O'Connor frees between the Hill 16 posts. Ciaran Kilkenny was the stand-out player on view before the break, knocking over three Dublin points from play.

There were late changes to both starting XVs, with Michael Darragh MacAuley replacing Denis Bastick at midfield for the Dubs, while Mayo introduced goalkeeper Rob Hennelly and corner forward David Drake in place of David Clarke and Barry Moran respectively.

Lee Keegan nonchalantly opened the scoring in the first minute but Connolly tucked the Dublin penalty to the bottom left corner of the Mayo net after Paul Flynn had been hauled down. Paddy Andrews lofted over a Dublin point from a tight angle and Mayo lost full back Donal Vaughan to injury inside ten minutes, with Patrick Durkan replacing him. Dublin had also lost their full back Rory O'Carroll to a head wound early on.

Connolly and Bernard Brogan extended the gap to five points but Mayo hit back with a brace of O'Connor frees. Andrews and Kilkenny pointed either side of a third O'Connor free as the hosts led by double scores after 22 minutes, 1-5 to 0-4.

For the second time, an O'Connor free was moved closer to the posts due to Dublin indiscipline - and for the second time the Mayo attacker made them pay with an effortless finish. Kilkenny notched two more Dublin points either side of a fifth O'Connor free and it was O'Connor who closed the first-half scoring with his sixth converted free deep into added time.

Cillian (free) and Diarmuid O'Connor - with a superb point off the outside of his right - reduced the gap to the minimum upon the resumption but half-time substitute McManamon replied. O'Connor's eighth pointed free came from the left wing and Dublin had MacAuley black-carded before Mayo missed relatively-easy chances through Diarmuid O'Connor and sub Moran.

Connolly thumped a free into the Hill with the outside of the right and on 57 minutes McManamon was on hand to prod the loose ball to the back of the net after Hennelly had saved from Fenton. When Mayo replied with a Cillian O'Connor '45', Dublin struck quickfire points from Bernard Brogan, sub Alan Brogan and Jack McCaffrey to lead by seven.

Moran pulled back a point - Mayo's third score from play - and corner back Higgins closed the gap further before Moran picked Cluxton's pocket only to see his shot deflected onto the post by substitute John Small. Sub Freeman registered the Connacht champions' third point on the spin.

Two minutes from the end, O'Connor lashed his penalty to the net after Colm Boyle went down; Moran then equalised following a rash Cluxton restart. Five minutes of injury time produced no further scores and the sides will meet again next Saturday evening.