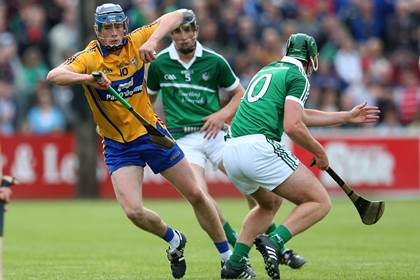 Thirteen points from unerring Man of the Match Ronan Lynch helped Limerick to a thrilling 0-22 to 0-19 victory over holders Clare in Ennis.

With racing royalty JP McManus and Tony McCoy amongst the sell-out crowd of 14,311 in Cusack Park, it was the Limerick lads who produced a thoroughbred display to capture the silverware for the first time since 2011 and the seventh time since the competition's inception.

Defending provincial and All-Ireland champions Clare contributed enormously to a wonderful contest but came up marginally short in their bid for a fourth successive title. As well as taking the silverware, the winners also advance to an All-Ireland semi-final date with Galway.

At the end of an exhilarating opening half-hour of hurling, during which the sides were level five times, Clare led by two points, 0-12 to 0-10. At one stage, the victors landed six successive points to lead by double scores, 0-8 to 0-4, but the Banner outscored their neighbours by eight points to two in the last seven minutes of an absorbing opening period.

Four fabulous points were shared inside the opening five minutes: Limerick smashed over two great scores inside 90 seconds courtesy of Na Piarasigh's David Dempsey and midfielder Darragh O'Donovan. Shane Gleeson replied with a lovely score on three minutes and Shane O'Donnell clipped over a classy levelling score from the left wing in the fifth minute.

Gleeson's second had the holders in front for the first time and a converted Bobby Duggan free made it double scores. A Ronan Lynch '65' left the Banner ahead by the odd point from seven after ten minutes and the Limerick N.10 also fired over a free in the 13th minute to tie the scores up for the second time.

Lynch (free) grabbed his third successive point from a tight angle close to the right sideline as the challengers went back in front and Robbie Hanley's brilliant point made it 0-7 to 0-4 after Lynch had stroked over his fourth in a row from placed balls.

Demspey's second score of the match was the Treaty's sixth without reply; corner back Eoin Quirke and Duggan replied with a brace of stunning Clare scores from distance and Donal Moloney's men were back within the minimum when Duggan flashed over a close-range free five minutes from the break, 0-8 to 0-7.

Midfielder David Conroy took a quick glance at the posts on the run before hammering over another sensational Clare score and Clonlara's Ian Galvin supplied Clare's fifth point inside three devastating minutes as they roared back ahead.

Cian Lynch and Ronan Lynch (free) ensured that the sides were level again on the stroke of half time, 0-10 apiece, with Galvin registering for the hosts in between. A sumptuous Gleeson point put the Banner boys back in front and a Duggan free deep into stoppage time ensured the holders of a two-point cushion at the short whistle.

Galvin stretched the gap upon the restart and full forward Stephen Ward sent over the losers' fourth consecutive point from a terrific sideline cut before Limerick - now playing against the breeze - struck back with another Ronan Lynch quadruple - three frees and a nice point from play, leaving the sides level yet again after 42 minutes, 0-14 apiece.

Amazingly, No.10 Lynch added another - his fifth in succession! - to edge John Kiely's men back in front. A foul on O'Donnell presented Duggan with the leveller as the sides remained deadlocked at the three-quarters stage.

Lynch's eleventh point (free) sailed between the sticks in the 48th minute and the influential Colin Ryan supplied the score that doubled the gap with ten minutes left to play. Clare corner back Quirke raided forward to drill over his second point of the contest and goalkeeper Keith Hogan executed a superb diving save to deny Cian Lynch a goal nine minutes from time.

Lynch made no mistake from the accruing '65' as the visitors led by 0-18 to 0-16 with only eight minutes remaining. Full forward Tom Morrissey got in on the act on 53 minutes and that man Lynch added his final score 30 seconds later as the Treaty County assumed a commanding four-point advantage.

Galvin stopped the rot with his fourth and Duggan arrowed over a free 90 seconds from the end of the regulation 60 to leave two in it. Fifteen seconds from full time, Pat Ryan took a pass from the strong-running Cian Lynch to supply Limerick's 21st score; sub Michael O'Malley retorted but fellow sub Jack Kelliher hit back with the final act of a pulsating match.