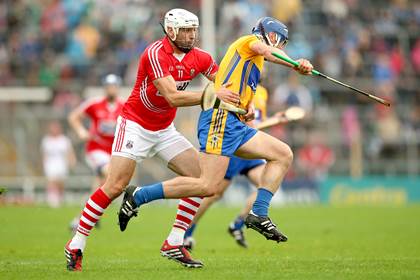 Four successive Patrick Horgan points between the 61st and 68th minutes proved decisive as Cork defeated Clare by 0-20 to 0-17 in Thurles.

On a night punctuated by poor shooting and even poorer weather, where the scores were level eight times, the Rebels landed the last five points to snatch a thrilling win and seal an All-Ireland quarter-final date with Galway.

With 25,245 spectators kept guessing from start to finish, Pa Cronin's injury-time strike handed Jimmy Barry-Murphy's men a 0-10 to 0-9 lead at the end of a pulsating opening period.

The sides were level five times during the first half but four points from Horgan helped the Rebels take the slenderest of advantages into the interval.

After Seamus Harnedy opened the scoring, the Banner replied with finishes from Shane O'Donnell, Tony Kelly and Conor McGrath but Conor Lehane and Horgan ensured that the scores were level after ten minutes. Colin Ryan and Shane Golden became the seventh and eighth different players to raise flags as Clare moved two in front again.

Horgan and the immense Tony Kelly exchanged points; the Rebels were guilty of eleven wides inside the opening 22 minutes! But it was level again with ten minutes left before the break as Harnedy and Lehane each chipped in with their second.

Alan Cadogan pointed the Leesiders ahead for the first time but Ryan (free) and McGrath were on hand to ensure that Davy Fitz' men led by the odd point from 15 with half an hour played.

Midfielder Conor Ryan and Horgan (free) traded points before the latter clipped over his second successive point to tie the scores up once more: 0-9 each with the interval looming.

Aidan Walsh and McGrath also exchanged points in the first minute of the second half; wing back Cormac Murphy and Kelly did likewise; as did Bill Cooper and Kelly - 0-13 to 0-12 after 41 minutes. A huge Kelly free meant it was all-square again; Cronin restored the Rebels' lead on 46 and Jamie Coughlan doubled the difference with his first touch five minutes later.

Clare were level again by the 56th minute, with corner back David McInerney and O'Donnell providing the scores. Just short of the hour mark, Darach Honan supplied the third successive Banner score as they edged back ahead; Colm Galvin made it 0-17 to 0-15 and Cork were now ruing the 18 wides they'd recorded inside the opening hour…

Unbelievably, they were soon level again as Horgan nailed two frees in as many minutes. The Glen Rovers ace registered his third successive free five minutes from time as the lead changed hands again. Matchwinner Horgan bagged his fourth in a row and substitute Paudie O'Sullivan took a pass from Harney to leave three in it with a minute of regulation time left.

There was no way back for the 2013 All-Ireland champions as the Rebel County progressed to the last six.