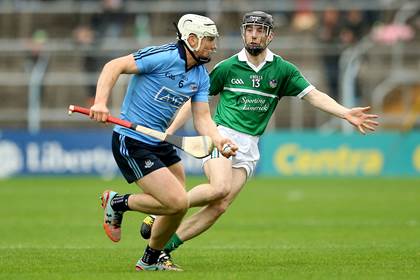 Dublin came from eight points down to beat Limerick by 1-17 to 1-16 in a topsy-turvy encounter at unseasonal Semple Stadium.

Nine unanswered points either side of the break, a magisterial Man of the Match display from Paul Ryan (0-12) and some terrific Liam Rushe graft won the day as the Liffeysiders sealed an All-Ireland quarter-final date against the losers of tomorrow's Tipperary-Waterford Munster final.

Limerick, who will be wondering how they conspired to lose this game, controlled most of the first half and roared into a commanding 1-7 to 0-2 lead inside 25 minutes. But they missed the target eleven times during the opening 35 minutes and allowed Dublin to clip over the last four points before the break to leave just four in it at the short whistle, 1-8 to 0-7.

TJ Ryan's charges led by four points to one after 13 minutes, with Paudie O'Brien, Shane Dowling (2) and Kevin Downes on target and Ryan O'Dwyer replying in between. The dominant Munster county also hit seven wides before a 16th-minute Ryan free reduced the gap.

Dublin made two late changes to their starting team, with Shane Durkin and Daire Plunkett coming in for Cian O'Callaghan and Cian Boland respectively; the Treaty started as selected.

Graeme Mulcahy and Dowling - with his second converted '65' - left four between them before a Declan Hannon sideline cut majestically split the posts: 0-7 to 0-2. Ten minutes from half time, David Breen became the sixth Limerick man to score as his goal left eight points between the teams in a very one-sided contest thus far.

Limerick's Seamus Hickey dejected after the game as he is consoled by Paul Ryan of Dublin. ©INPHO/James Crombie.

Plunkett and Hannon swapped points before a Ryan triple-salvo - two frees and a super strike from play - and a point from Mark Schutte brought the Dubs back within four with three minutes left before the break. The half-time whistle sounded with both sides still fancying their chances of progressing.

Five more unanswered points upon the restart - all of them coming from Ryan, three from frees - saw Ger Cunningham's men move ahead for the first time, 0-12 to 1-8. Having conceded nine without reply either side of the break. Limerick responded through Dowling (free), who was immediately substituted. His replacement Sean Tobin pointed a free to restore the Treaty lead 13 minutes into the second half.

Tobin's point from play put two between the teams with 20 minutes remaining, 1-11 to 0-12, and his third successive point (free) stretched the gap further as momentum swung back briefly towards the Shannonsiders. Plunkett flashed a Dublin goal chance over the bar and Mulcahy - after Nickie Quaid saved from David O'Callaghan - cancelled out another Ryan effort as the losers kept their noses in front.

The goal had been coming though and, sure enough, O'Callaghan finished neatly to the net in the 62nd minute after a mix-up in the Limerick defence to give the Metropolitans a 1-14 to 1-13 lead. Tobin's fourth point (free) tied the scores up again with six minutes left but points from substitute Boland and Ryan - his eleventh - had the Dubs in the boss seat with four minutes remaining.

Tobin's 70th-minute free ensured the tensest of finishes but a thumping injury-time Ryan point gave the Dubs some breathing space. Dublin were reduced to 14 men when Chris Crummey picked up his second yellow at the death and Tobin's late, late free was of no consequence as the Dubs held on for a dramatic win and a place in the last six.

Limerick's year is over and they will feel that a lot of decisions went against them today.