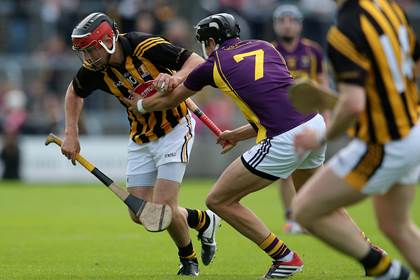 Wexford captured their third successive provincial U21 crown with an eye-watering 4-17 to 1-9 dismantling of Kilkenny at Wexford Park.

With nearly 8,000 spectators in attendance, Conor McDonald (1-10) delivered a mesmerising Man of the Match display for the wonderful winners, who prevailed by an unbelievable 17 points in the end and were full value for that landslide success.

This is the first time since 1971 that the Model County have managed to string together three successive provincial titles at this level but the 2015 team surely has eyes on bringing the All-Ireland home for the second time (Wexford's sole All-Ireland U21 title was won in 1965).

The Noresiders - themselves bidding for a third provincial crown inside four days - were blown away before the break as goals from the superb McDonald, James Cash and Andrew Kenny gave the rampant hosts an unassailable 3-8 to 1-4 interval advantage. Unbelievably, the winners landed a staggering 3-5 without reply between the 5th and 24th minutes.

Brian Ryan's Cats got off to a flying start as - at the second attempt - corner forward Liam Hickey planted the sliothar to the back of the Wexford net inside twelve seconds. Midfielder Willie Brennan's point was cancelled out by a McDonald free but Liam Blanchfield was on hand to leave four between the sides after just three minutes.

Semi-final Man of the Match Kevin Foley floated over a lovely point for the holders and Naomh Eanna clubman McDonald helped himself to another beautifully-struck free before Model goalkeeper Oliver O'Leary executed a heroic save to deny Chris Bolger.

The Slaneysiders were back within the minimum by the tenth minute thanks to scores from McDonald (free) and wing back Jack O'Connor. McDonald's 14th-minute free tied the scores up for the first and only time and his first score from play - and fourth in all - gave JJ Doyle's men the lead for the first time. A lead they would not relinquish!

The brilliant No.14 then danced through the Black & Amber rearguard to poke the ball past Darren Brennan for a wonderful 18th-minute solo goal - 1-6 to 1-2 and 1-5 without reply!

In the 20th minute the defending champions struck for their second major and again McDonald was at the heart of the action, turning deceivingly and laying off a precise handpass to Cash who rifled to the net.

Incredibly, on 23 minutes, the winners registered their third major and this time it was the other wing forward, Kenny, who latched onto possession before calmly placing the ball into the top right corner of the net: postage stamp!

Corner back Evan Cody replied with Kilkenny's first score in 21 minutes but this game was over with nine points between the teams, 3-6 to 1-3. Twin terrors McDonald (who bagged 1-5 in the first half) and Foley pointed either side of a Conor Martin free and Martin posted another free in injury time to reduce the arrears to ten at the short whistle.

McDonald continued where he'd left off with a sumptuous point in the second minute of the second half. After Martin replied, the Model County grabbed their third goal in the 34th minute through Cathal Dunbar at the end of a great team move. McDonald made it a 14-point match, 4-10 to 1-5, and his haul went up to 1-8 as he smashed over a free from inside his own half.

Martin (free) and Dunbar traded scores and Foley's stunning point from distance gave the victors a whopping 4-13 to 1-7 lead at the three-quarters stage.

McDonald, substitute Shane Murphy and McDonald again added points for the winners and substitute Sean Kenny completed the rout in injury time. Next up for Wexford is an All-Ireland semi-final and this side is going to take some stopping!

What a sight, bursting with pride tonight, shows what we can do! #future pic.twitter.com/iclSrROIlf