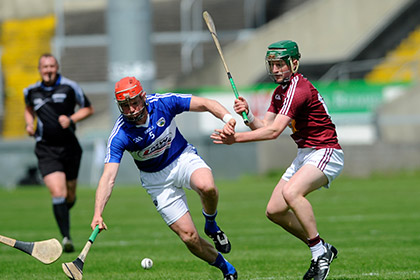 Laois enjoyed a 1-20 to 1-17 victory over Westmeath at O'Moore Park but both teams are through to the Leinster SHC quarter-finals.

The Lake men will face Wexford on Sunday week while Seamus Plunkett's charges - who looked set to miss out when trailing by six points today but ultimately finished top of the preliminary group - will lock horns with Offaly on the same day.

Westmeath, who lost Robbie Greville and Shane Power to late red cards, led by 0-10 to 0-6 at the break and a Brendan Murtagh goal within 20 seconds of the restart had them in the driving seat. They still led by 1-13 to 0-12 with 15 minutes left but Cha Dwyer took a pass from substitute Stephen 'Picky' Maher and buried the sliothar in the bottom corner to turn the match on its head in the 56th minute.

Dwyer also provided the equaliser and points from Willie Hyland, Roddy King and Zane Keenan (0-10) put the hosts into a three-point lead which they were never likely to relinquish.