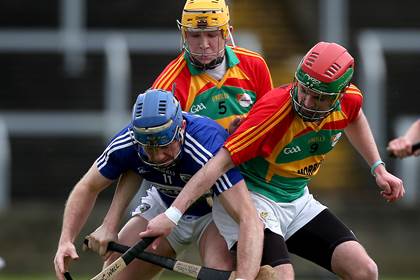 Laois' Willie Hyland and Craig Wall of Carlow when both sides met in the 2014 Leinster SHC.
©INPHO/Ryan Byrne.

Leading by 0-7 to 0-5 at the break, the visitors stepped it up in the second half to open up an 11-point lead before a late Carlow rally - which included an Eddie Byrne goal - left three in it at the final whistle. Seamus Plunkett's charges will host high-flying Westmeath in the final round of the round-robin series in a fortnight's time when a place in the quarter-finals will be up for grabs. By contrast, Carlow will have only pride to play for when they face Antrim in what will be their last outing of the campaign.

The teams were level four times in a poor-quality first half before a Zane Keenan free edged Laois ahead for the first time. Keenan finished the first half with five points, while Stephen 'Picky' Maher also found the target on his return from injury. But for nine wides, the visitors' half-time advantage would have been greater.

Conroy scored 1-3 following his half-time introduction as clear daylight appeared between the sides for the first time. Keenan continued to rack up the frees and Cha Dwyer also chipped in with a couple of scores before Carlow launched a late comeback which yielded points from Diarmuid Byrne, Jack Kavanagh and centre back David English.

Eddie Byrne's 69th minute goal left just a score in it as the O'Moore men were forced to withstand late pressure before securing their first win of the campaign.